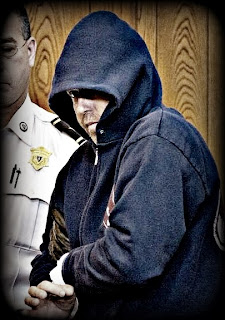 Worcester Police Officer Robert Farrar was granted bail with house arrest and electronic monitoring in a domestic assault case. He pleaded not guilty to assault and battery, aggravated assault and battery, assault and battery with a dangerous weapon - a belt, and possession of Percocet. Farrar got around having to face a dangerousness hearing because the said-victim agreed to letting him be bailed out and put on house arrest with some conditions. They say he has turned in his weapons, is under a protection order to stay away from home and some schools, has a monitoring device, gets to leave his zone for work and appointments and is scheduled to be back in court November 12 for a pretrial hearing.

It's agonizing to realize the ramifications for all in this situation and I can only hope that there is some good that can come out of it's being public. Perhaps other officers will gaze beneath that hoodie, see themselves - and make changes.

And I have to pause and give props for the police and courts appearing at this stage to be handling domestic assault as a crime instead of a private matter. I wish the best outcome for all involved.