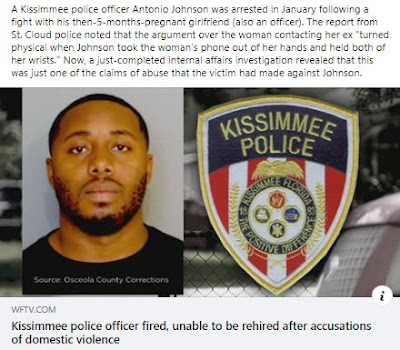 KISSIMMEE POLICE OFFICER FIRED, UNABLE TO BE REHIRED AFTER ACCUSATIONS OF DOMESTIC VIOLENCE - A Kissimmee police officer was just fired, and cannot be rehired, after he was accused of domestic violence against another member of the force.
July 20, 2020
[Excerpts] A Kissimmee police officer [Antonio Johnson] was just fired, and cannot be rehired, after he was accused of domestic violence against another member of the force... Oftentimes, internal affairs investigations will be put on hold until a criminal case can play out in court. In this case, Police Chief Jeff O’Dell said because the alleged domestic violence victim was also a KPD officer, there was no delay. Johnson was arrested in January following a fight with his then-5-months-pregnant girlfriend... Now, a just-completed internal affairs investigation revealed that this was just one of the claims of abuse that the victim had made against Johnson. “I was close to both of them, so it’s almost like a family member, really,” O’Dell said. “It definitely hurt my heart when I heard the details.” Johnson has pleaded not guilty on felony battery charges, but the alleged victim wrote in an injunction filing that he had broken several of her phones so that she couldn’t call 911. She also claimed that he would grab her by the face and off her feet by her jaw during arguments, noting “the pain was excruciating but never left bruises.” The woman also wrote in the injunction filing that Johnson allegedly pointed a gun toward her and pulled the trigger. “Thankfully the gun wasn’t loaded, but I thought he was going to shoot me”... The victim in the case later pulled her injunction request because the two were about to have a child. Prosecutors moved forward with the charges anyway... Johnson has exhausted all of his union appeals, and he will not be able to get his job back. KPD plans to send the internal affairs file to FDLE in order for action to be taken against his law enforcement certification... [Full article here]
[police officer involved domestic violence oidv intimate partner violence ipv abuse law enforcement public safety cop on cop florida state politics terroristic threatening]
on 7/22/2020