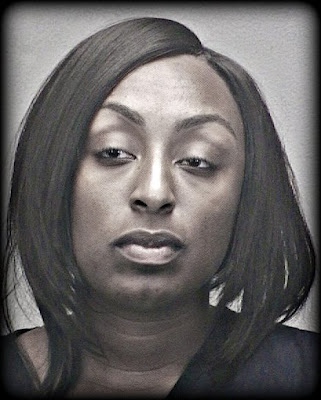 Palm Beach County Sheriff's Deputy Saida Douglas
PALM BEACH COUNTY SHERIFF'S DEPUTY CHARGED WITH SHOOTING GUN DURING DOMESTIC DISPUTE
Sun Sentinel
By Danielle A. Alvarez
March 9, 2011
[Excerpts] A Palm Beach County sheriff's deputy appeared in bond court on Wednesday, the morning after she was arrested and charged with shooting her service revolver during a fight with her husband at home in Lauderhill, according to Lauderhill police. Saida Douglas, 30, was ordered held on $60,000 bond for two felony counts including aggravated assault with a firearm. Police said she shot a bullet into a bedroom wall while fighting with her husband, Michael Douglas, 25, with three children inside the house... Michael Douglas appeared at the bond court hearing on Wednesday. He pleaded with Judge John "Jay" Hurley, saying the incident was a "misunderstanding" and that his wife never pointed the gun at him or threatened him. He said she intended to scare, not kill, him. Hurley ordered Saida Douglas to stay 500 feet away from her husband. She may not possess any firearm or ammunition. "The court is pretty darn sure you were taking a shot at your husband," Hurley told Saida Douglas. "The court is not confident that you are responsible enough to have a gun in your possession." Saida Douglas was placed on administrative leave with pay, according to Teri Barbera, a Sheriff's Office spokeswoman. Employed there since 2008, she works as a corrections deputy at the main detention center. [Full article here]
[police officer involved domestic violence oidv intimate partner violence ipv abuse law enforcement public safety lethal florida state politics female perp perpetrator]
on 3/13/2011