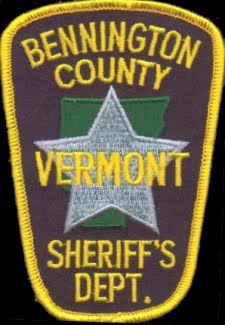 Bennington County Sheriff’s deputy Wayne Davis charged with first degree aggravated domestic assault and unlawful mischief.
BENNINGTON COUNTY SHERIFF'S DEPUTY CHARGED IN DOMESTIC DISPUTE
WNYT
03/08/2011
A Vermont sheriff's deputy is facing charges of domestic violence. Vermont State Police say 43-year-old Wayne Davis was arrested for an off-duty incident Sunday in which Davis is alleged to have thrown a can of soda of at a woman, grabbed her neck and threw her to the floor. He pleaded not guilty Monday to domestic assault charges. WCAX-TV says Davis, a part-time deputy with the Bennington County Sheriff. [LINK]
DEPUTY HELD ON DOMESTIC CHARGE
Bennington Banner
Keith Whitcomb Jr.
Posted: 03/08/2011
Tuesday March 8, 2011
[Excerpts] A Bennington County Sheriff’s Department deputy was ordered held without bail Monday after pleading not guilty to felony domestic assault... Judge David Howard ordered Wayne Davis Jr., 43, held until a weight of the evidence hearing on Thursday. Davis, of North Branch Street, had pleaded not guilty to one count of first degree aggravated domestic assault and one count of unlawful mischief... Davis is also a member of the Bennington Rural Fire Department and a Bennington town highway employee... According to an affidavit by Bennington Police Officer David Faden, on Sunday he was dispatched to the Best Value Inn on Route 7 for a report of Davis forcing his way into a room there, then leaving. Police met with Davis in the parking lot of the Park Lawn Cemetery, where he was interviewed by Cpl. Thalia Hudson as other officers went to the hotel. There they met with a woman who said Davis had come into the hotel, yelled at her, then poured soda on her laptop computer before throwing the can at her. She said she blocked the can with her arms, but Davis grabbed her and squeezed her neck... The woman said that once he was out, Davis kicked at the door and knocked on the windows, demanding to be let back in while shouting at her. The woman said she’s been in a relationship with Davis for a little under two decades, and there has been a history of abuse against her. She claimed Bennington Police had investigated one incident, but she didn’t press charges... According to the affidavit, the woman applied for and was granted a temporary relief from abuse order. Davis was required to surrender a number of weapons he owns... [Full article here] [police officer involved domestic violence oidv intimate partner violence ipv abuse law enforcement public safety vermont state politics]
on 3/13/2011