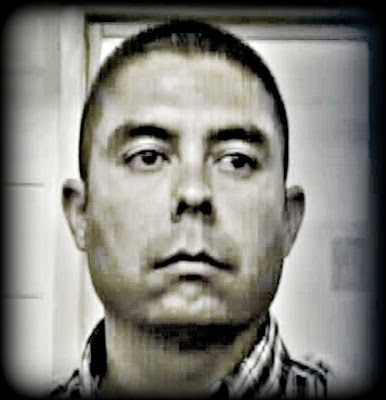 ...[Bernalillo County sheriff's deputy, Sgt. Augustine] Lucero was [also] arrested in Belen in April 2009, for assault on a household member, but those charges were dismissed...
NM DEPUTY TAKES A PLEA DEAL?
Albuquerque Express (Source: KRQE)
Saturday 5th March, 2011
ALBUQUERQUE (KRQE) - A deputy, who was set to go on trial for battering his ex-wife, has taken a plea deal to lesser charge. Investigators said Bernalillo County Sheriff's Deputy Augustine Lucero slammed his estranged wife;s arm in his unmarked patrol car door during an argument. Lucero has not yet been sentenced. He is on leave form the department, working in animal control. [LINK]
That small article doesn't mention that the crime happened in front of their 7 year old daughter, or that this isn't the first time. So here's excerpts from an earlier article:
BERNALILLO COUNTY SHERIFF'S DEPUTY ARRESTED IN ASSAULT
KOAT
November 5, 2010
[Excerpts] A Bernalillo County sheriff's deputy is arrested, accused of slamming his car door on his ex-wife in front of their 7-year-old daughter. However, this was not the first time Sgt. Augustine Lucero has been arrested for allegedly hurting a family member. According to a criminal complaint, Lucero told police he was unaware that he slammed his car door on his ex-wife's arm, but she says he slammed the door repeatedly... “The children said that the dad basically slammed the car door on the mother's arm,” said [Albuquerque Police Department Spokesperson Trish Hoffman] Hoffman. Lucero was arrested in Belen in April 2009, for assault on a household member, but those charges were dismissed... Lucero will remain on paid administrative leave while the department conducts an internal investigation... [Full article here]
[police officer involved domestic violence oidv intimate partner violence ipv abuse law enforcement public safety new mexico state politics]
on 3/10/2011