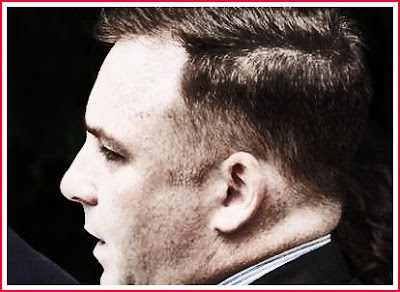 Dennis Byrne
Fired Sandwich Masachusetts Police Officer
Dennis Byrne, a fired Sandwich police officer, had his probation revoked Wednesday and will serve six months in jail for his 2009 assault on the former boyfriend of his wife... In the Feb. 21 incident, police allege Byrne hit the boyfriend repeatedly while the couple was in bed, then hit both victims with a lamp and slammed his wife's face into a wall...

PREVIOUS POSTS:
FORMER SANDWICH COP ORDERED JAILED
Cape Cod Times
By George Brennan
March 02, 2011
[Excerpts] Former Sandwich police officer Dennis Byrne was today ordered jailed, and his probation in a 2009 assault case revoked, following an alleged Feb. 21 attack by Byrne on his wife and her boyfriend. The order by Barnstable District Court Judge Joan Lynch came after a 2 1/2-hour hearing today in connection with Byrne's alleged attack Feb. 21 on his wife and her boyfriend at their Hyannis home... Byrne hit the man several times in the head, causing a wound that required 37 stitches... The 2009 case was originally continued without a finding, meaning that if Byrne was arrested within a two-year period he could be given jail time, which the judge ordered today. Byrne was ordered to serve six months of the year jail sentence. In the Feb. 21 incident, police allege Byrne hit the boyfriend repeatedly while the couple was in bed, then hit both victims with a lamp and slammed his wife's face into a wall. He pleaded not guilty last week to armed burglary and assault, assault with a dangerous weapon (lamp), assault and battery, and vandalism... [Full article here]

'SOAP OPERA' LANDS SANDWICH EX-OFFICER IN JAIL
Cape Cod Times
By George Brennan
March 03, 2011
BARNSTABLE — Dennis Byrne, a fired Sandwich police officer, had his probation revoked Wednesday and will serve six months in jail for his 2009 assault on the former boyfriend of his wife. The sentence followed a three-hour hearing Wednesday in Barnstable District Court that Judge Joan Lynch described as a "soap opera." Courtroom testimony was at times emotional... Before the hearing, Byrne, who has been held at Plymouth County Correctional Facility since his recent arrest, shuffled into the courtroom in shackles mouthing words to his wife. He repeated the gestures while she was on the witness stand, apparently out of view of Lynch. During testimony, Byrne's wife told the court she wasn't afraid of the ex-police officer, even though she asked for and was granted a restraining order on Tuesday. Christina Maxwell, a family friend, said Byrne had threatened to kill his wife during an incident a year ago. "He said the only way I'm leaving is if (she) is in a body bag," Maxwell said... Byrne's attorney, Jens Bahrawy, argued that the repeated infidelity, the loss of his job as a Sandwich police officer, and the foreclosure on the couple's home all played a role in her client's behavior. "Mr. Byrne describes it as having the rug of his life pulled out from under him," Bahrawy said... Had Byrne not been charged with another crime, the assault and battery charge in the 2009 case would have eventually been dismissed. Instead, he now has a criminal record and faces the charges related to the Feb. 21 incident. Along with the six months in jail, Lynch sentenced Byrne to two years of supervised probation during which he will have to wear a GPS tracking device. Byrne also was ordered to stay away from his wife and her boyfriend. [Full article here]
[police officer involved domestic violence oidv intimate partner violence (IPV) abuse law enforcement public safety repeat hx brutal lethal massachusetts state politics]
on 3/03/2011