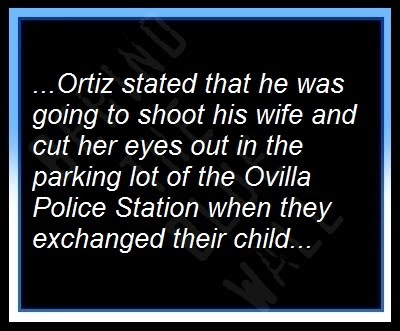 PREVIOUS POST:
[US] [TX] Dallas FBI Agent Carlos Ortiz spoke of brutal plans to murder FBI wife and FBI boss - ...FBI agent Carlos Ortiz was fired Wednesday before being taken into custody... Ortiz is accused of making “extreme-type” threats against his wife, an FBI analyst whom he is divorcing, planning to kill her, and also planning to kill his boss... Authorities assigned security to Ortiz's wife... The affidavit also says Ortiz was seen as a threat to himself or others on two previous [armed standoffs] occasions... On both occasions, the affidavit says law enforcement officers convinced Ortiz "to check himself into a "health facility for evaluation and/or treatment"... 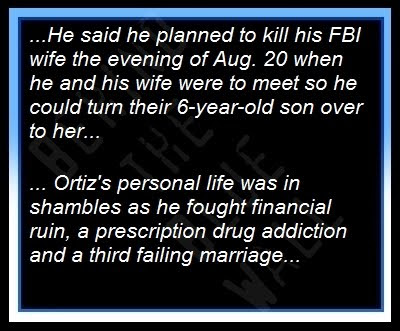 FORMER DALLAS FBI AGENT GETS TWO YEARS IN PRISON FOR PLAN TO KILL BOSS
The Dallas Morning News
By JASON TRAHAN
25 March 2011
[Excerpts] Former FBI agent Carlos Ortiz Jr. was sentenced Friday to two years in prison for attempting to purchase a .50-caliber rifle that he planned to use to assassinate the head of the Dallas field office. Ortiz, 49, of Red Oak, faced a maximum of 10 years in prison after he pleaded guilty in December to threatening to kill Dallas FBI Special Agent in Charge Robert Casey Jr... Casey suspended Ortiz without pay in May after Ortiz's wife, an analyst in the Dallas FBI office, accused him of domestic violence. In the year leading up to his arrest, Ortiz's life unraveled. He declared bankruptcy, filed for divorce, doubled up on his anti-anxiety drug prescription and applied for food stamps. He also began hoarding weapons. On Aug. 19 and 20, Ortiz made several phone calls to a friend, a former law enforcement officer and licensed firearms dealer, authorities said. In those calls, he made threats against his wife and Casey and said he was looking for a .50-caliber rifle, capable of shooting up to a mile. The friend was alarmed after the first call and notified the FBI. Agents had him record later calls in which Ortiz again threatened to kill his wife and Case... Ortiz has had troubles with the law before, including armed standoffs with local police in 1992 and again in 2004. No charges were filed in either case, and he returned to duty as an FBI agent, even though after the first standoff incident then-Dallas FBI boss Oliver "Buck" Revell recommended he be terminated. Ortiz's 21-year career with the FBI included service as a SWAT team member and a sniper... [Full article here] 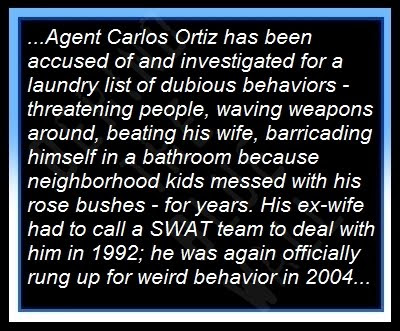 SINCE LAST POST:
EX-OFFICIAL WANTED TO FIRE FBI AGENT HELD IN MURDER PLOT AFTER 1992 STANDOFF
The Dallas Morning News
By JASON TRAHAN jtrahan@dallasnews.com
03 September 2010
[Excerpts] A former special agent in charge of the Dallas FBI office said he tried to fire Carlos Ortiz 18 years ago after the troubled agent was involved in a seven-hour armed standoff with SWAT team members. But Oliver "Buck" Revell said his recommendation was rejected by his FBI superiors in Washington because Ortiz, who is currently accused of plotting to kill his wife and his former boss, was deemed fit for duty by psychiatrists... "My recommendation to headquarters was unequivocal that this man was not qualified to be an agent or carry a weapon and I want him out of my office. They said, 'Well that would be a discriminatory action.'" Ortiz remained an FBI special agent for nearly two more decades after that, despite initiating a second armed standoff in 2004 when, authorities say, he took his own child hostage. Again, Ortiz passed a mental evaluation and returned to duty.... His career effectively ended in May when he was placed on unpaid leave after his wife, a bureau intelligence analyst, accused him of physically assaulting her during an argument and threatening to "beat the [expletive] out of" her. But it wasn't until last month that he was fired and placed in handcuffs - after he allegedly tried to get a friend to help him buy a .50 caliber rifle so that he could kill not only his wife, with whom he is engaged in a bitter divorce, but also the current head of the Dallas FBI office, Robert E. Casey Jr... The FBI came under fire in 2004 when Sen. Charles Grassley, R-Iowa, accused the bureau of trying to keep an internal study of agents' misdeeds from becoming public... But cases such as Ortiz's continue to pose challenges. For one, he was never charged in any of his incidents... To some, the eventual arrest of wayward agents often comes too late. "Who cares about being sued," Revell said. "We've got lots of lawyers. I care about people's lives. You do what you need to do and worry about a lawsuit later." [Full article here]
FORMER FBI AGENT PLEADS GUILTY TO FEDERAL FELONY OFFENSE
Defendant Admits Threatening to Assault and Murder
FBI Special Agent in Charge
U.S. Department of Justice
United States Attorney James T. Jacks
Northern District of Texas
FOR IMMEDIATE RELEASE
MEDIA INQUIRIES: KATHY COLVIN
WEDNESDAY, DECEMBER 15, 2010
http://www.usdoj.gov/usao/txn/
[Excerpts] DALLAS — Carlos Ortiz, Jr., 49, of Red Oak, Texas, pleaded guilty this afternoon before Chief U.S. District Judge Sidney A. Fitzwater to one count of retaliating against a federal official, announced U.S. Attorney James T. Jacks of the Northern District of Texas. Ortiz has been in federal custody since his arrest in late August 2010 on a related charge outlined in a federal criminal complaint. He faces a maximum statutory sentence of 10 years in prison and a $250,000 fine. Sentencing is set for March 18, 2011, before Judge Fitzwater... That afternoon, Ortiz contacted the friend from whom he had received the weapons, and on a recorded call, stated that he wanted a .50 caliber gun. During the conversation the friend asked Ortiz why he didn’t want to meet at the police station to exchange his child with his ex-wife, Ortiz replied, “No, ‘cause that son of a bitch (Casey) told me if I got anywhere near a police department he was gonna do something else, ‘cause God knows what else he’d put on my ass.” The friend asked if Ortiz was referring to the Dallas Division SAC. Ortiz replied, “Yeah, I’m definitely gonna piss on his grave, I might just put a .308 down his fucking (unintelligible).” During the call, Ortiz expressed anger at losing his job with the FBI, saying “and what do I have for 26 years, one more year away from retirement? Shit. And an OPR”... On the date of his arrest, during the execution of a federal search warrant at Oritiz’ residence and vehicle, a “signed sworn statement” by Ortiz was found. In this statement Ortiz writes, "...Mr. Casey has broken me as a man and human being, with his constant threats and follow through terminating me leaving with no way to sustain my son. Mr. Casey never listed to me and has left me no options." Additionally, Ortiz wrote, "Finally that if Mr. Casey was not allowed to have so much power unchecked this would have never happened..." This "signed sworn statement" was left in Ortiz’ residence in an envelope, which bore the following notation: "DAD TAKE TO THE PRESS." Included in the firearms seized were .308 caliber firearms, the caliber that Ortiz specified in his threat against the FBI Dallas Division Special Agent in Charge. The case was investigated by the FBI and the Bureau of Alcohol, Tobacco, Firearms and Explosives. Criminal Chief Assistant U.S. Attorney Chad E. Meacham is in charge of the prosecution. [Full article here]
[police officer domestic violence public safety double murder plot federal bureau of investigation cop-on-cop arsenal law enforcement terroristic threatening federal bureau of investigation brutal]
on 3/25/2011