[MI] Gun-to-wife's-head Deputy Harvey got to make a DEAL? 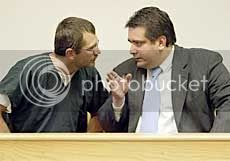 Last week Antrim County Deputy Michael Harvey pled guilty to assault charges and a misdemeanor count of domestic violence after having pushed his wife to the ground, striking her in the face, pointing his weapon at her (head?), and threatening to kill her "while on duty." (?) The most recent news didn't mention what happened to the original reports that he also pointed a taser gun at his two year old son. He HAD been charged with two felony counts of assault, a felony firearm charge, and two counts of domestic violence. (Those 2 dv charges were against another woman, not his wife, who the news doesn't tell anything more about.)

What Harvey's said to have said to his wife:
"If I get the (expletive) papers in the mail,
I am going to (expletive)
kill you
and your mother,
and I'm going to kill these two boys
and then I am going to kill myself...
You need to stop the attorney,
stop the divorce,
stop everything."
What did police carry out of his house? - What too many frightened spouses know - an arsenal: 57 firearms, both loaded and unloaded. (Pause and just iMAGine that!)

The DEAL that he got to make with the court? DROPPING "one count of felonious assault; one felony firearm charge; and a second domestic violence charge."