New York Police Detective Griselda Espinal was buried last week. Her husband killed her earlier this month. The children were there. After he stabbed her he left the room, one of the boys said he's going to get moms gun, dad came back into the room, the kids ran out screaming, "He's killing her! He's got her gun!" - except one. Their eight year old daughter was laying across her bleeding mother begging for someone to help her and shouting "No! No! No!".
He flung their daughter off, shot Griselda in the head, went out into the yard. When he put the gun to his face, their 12 year old son yelled out, "Papi, no, no!"
The police had been there before, for a knife incident where Griselda was cut, but there was no action taken and no report.

Could things have gone differently if it had not been treated lightly?

Good-bye Griselda - and blessings to your family - a prayer that they are surrounded with love and one day find their way past even some of the trauma and deep sorrow. 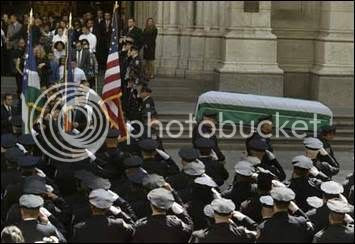 "About 750 uniformed police officers gathered at St. Patrick's Cathedral Thursday to mourn Griselda Espinal, who was stabbed and shot to death last Friday by her husband, Francisco, 37, police said. The shooting took place in front of the couple's three children and their 65-year-old baby-sitter..." (Source: NEWSDAY, August 18, 2006)
on 8/23/2006