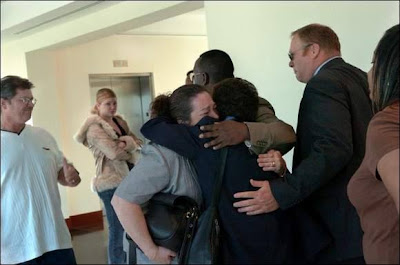 Charlotte County Officer Kathleen Hill was charged with second-degree murder. She shot her husband, Shawn Hill, 32, at least two times in the chest. The oldest child saw his father beat his mother. Doctors for both the defense and the prosecution testified that she suffered from depression and post-traumatic stress disorder because she was a battered wife. Friends and co-workers testified about her bruises, black eyes and limp.

Former corrections officer Kathleen Hill killed her husband when she pumped three bullets into his chest.

But she was freed Wednesday to go home to her three children.

The judge said he believed the man she killed, Shawn Hill , sexually tortured and abused her.

In the past 20 years, more defense attorneys have turned to battered spouse syndrome to argue self-defense.

Yet, it's unusual for any convicted killer -- even a woman driven to kill by her tormentor -- to get off without serving prison time, a Stetson University law professor said.

But in the case of Kathleen Hill , doctors for both the defense and the prosecution testified that she suffered from depression and post-traumatic stress disorder because she was a battered wife.

If Hill meets the conditions of her release, she will never see the inside of a prison.

Circuit Judge Frank Porter sentenced her to two years of community control, a form of house arrest, and 28 years of probation. He suspended a 10-year prison term she would serve only if she violates probation.

"I am mindful, very mindful, of the effects of both the defendant's and Shawn Hill 's actions as they relate to their children," Porter said. "I'm bothered most by what the children have endured."

At least the oldest one saw his father beat his mother. The children -- ages 4, 11 and 13 -- were home when Kathleen Hill fatally shot her husband Oct. 22, 2004. Suddenly, they were fatherless and faced the possibility of losing their mother, too.

Hill testified Tuesday that she stayed with her husband mainly for the children. Hill , a law enforcement officer who owned two guns and was trained to use them, said she endured years of brutal beatings.

Friends and co-workers testified about her bruises, black eyes and limp.

All three psychiatrists called to the stand testified that she showed the symptoms of battered spouse syndrome.

The consensus of the doctors influenced the prosecutors' decision to offer Hill a plea bargain, Assistant State Attorney Martin Stark said. On Sept. 11, Hill pleaded guilty to manslaughter, instead of second-degree murder as she was charged. As part of the deal, she was promised a maximum sentence of 10 years in prison.

Cases involving battered spouse syndrome are "tough," Stark said. Allegations that would be excluded in other cases are admitted to show the defendant's state of mind.

"Everything that makes them a battered spouse comes in," he said. "The only person who could respond is dead."

The Florida Supreme Court accepted the battered spouse syndrome as an argument for self-defense in 1993, said Robert Batey, a criminal law professor at Stetson University College of Law for 30 years.

"More and more states are accepting that evidence and allowing it," Batey said. "Florida has followed the trend."

But Shawn Hill 's family said the degradation of his reputation is worse than Kathleen Hill not being sentenced to prison.

"If I didn't know Shawn, I would have sworn he was the devil himself" after listening to defense testimony, said Leroy Washington, Shawn Hill 's brother.

"If all those people were aware of this abuse, why didn't they say anything to the people closest to Shawn -- his family?" Washington asked as he stared at Kathleen Hill .

A handful of Shawn Hill 's siblings and a niece testified they never saw signs of abuse. Before announcing his sentence, the judge addressed the family.

"I truly feel the pain of the Hill family," Porter said. "I feel compelled to tell you no matter what sentence is imposed today, it's not going to feel fair in your eyes. I would feel the same way in your shoes."

When they learned the sentence, several of Shawn Hill 's relatives cried.

Kathleen Hill , who sobbed during her testimony, stood before the bench, her jaw quivering, to learn whether she would be separated from her children.

She never smiled and walked out of court without saying a word.

Her husband's aunt, Antoinette Harris, was disgusted. Outside the courtroom, she said men in her neighborhood have been sent away for 15 years on drug convictions, much less murder.

"There should never be another black person arrested in this county ," Harris said, noting Kathleen and Shawn's interracial marriage. "This is a black/white situation."
on 10/05/2006