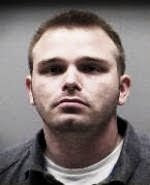 ...She told deputies she had been with Gearhart in his truck when he demanded that she "do something for him" and made threats to harm her if she didn't... Montgomery County Sheriff Phil Plummer told The Dayton Daily News that Gearhart tried to drown her...

POLICE OFFICER ARRESTED FOR ATTEMPTED MURDER OF EX-GIRLFRIEND
Dayton Daily News
By Lucas Sullivan
Monday, November 23, 2009, 03:44 PM
[Excerpts] WASHINGTON TWP., Montgomery County - A Columbus-area police officer [Whitehall Police Officer Joshua Gearhart] is in Montgomery County Jail on an attempted murder charge after he allegedly abducted his ex-girlfriend and tried to drown her in a ditch... Deputies found the woman covered in mud and grass clippings and soaking wet at a Shell Gas Station... The woman said Gearhart, a former Columbus police officer, drove from there and the two went out Saturday night, Landis said. At some point, Gearhart requested she “do something for him,” and made threats that he would harm her if she didn’t, Landis said... Gearhart allegedly tried to drown the woman in the ditch, but failed... County prosecutors today approved a felony abduction charge against Gearhart, which allowed deputies to get a warrant that will keep him in jail... Gearhart was fired from the Columbus Police Department last fall after an internal investigation... [Full article here]

EX-COLUMBUS POLICE OFFICER JAILED IN ASSAULT ON WOMAN
The Columbus Dispatch
By Jim Woods
Tuesday, November 24, 2009 3:20 AM
[Excerpts] ...Joshua Gearhart, 27, was arrested Sunday morning and charged with assault and abduction. Montgomery County deputies said they answered a report of a woman wandering in the road and found a woman covered with mud... She told deputies she had been with Gearhart in his truck when he demanded that she "do something for him" and made threats to harm her if she didn't. She grabbed the keys from his truck and fled. Gearhart caught up with her and the two wrestled in a ditch full of water, she told deputies. Montgomery County Sheriff Phil Plummer told The Dayton Daily News that Gearhart tried to drown her... Gearhart, of Circleville, was dismissed from his job as a Columbus police officer in September 2008 after an incident several months before. In June 2008, Circleville police charged Gearhart with falsification and menacing after a fight with his stepfather and his stepsister's boyfriend. The charges eventually were dropped after Gearhart completed a diversion program... But an internal Columbus police investigation as a result of the Circleville case found that Gearhart had misused a police computer system, and that led to his firing... Yesterday, Ray Ogden, Whitehall's director of public service... [Full article here]
[police officer involved domestic violence law enforcement lethal ohio state]
on 11/24/2009