Public Memorial: Tuesday, December 8 at 1 p.m. in the Tacoma Dome.

Fund: A benevolent account has been established for the families of the officers. Donations may be sent to LPIG Benevolent Fund at PO Box 99579, Lakewood, WA 98499 - DONATE ONLINE HERE 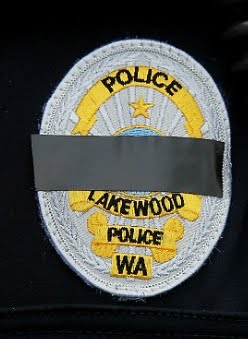 This is my own area and we are mourning for these officers, their families, and our community. I will add updates at the bottom of this post. The common feeling among everyone it seems is that there are

that can express the loss, the level of tragedy, what this means for the future of how police will operate, or to express what people are feeling. 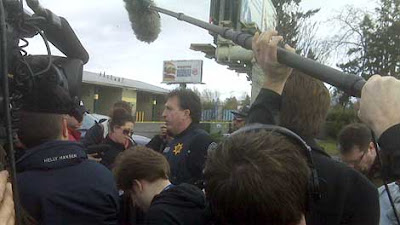 ...All four died instantly. The public information officer for the Lakewood Police Department broke down during an attempt to brief the press at the scene..."We have no motive at all. I don't think when we do find out it will make sense" ... 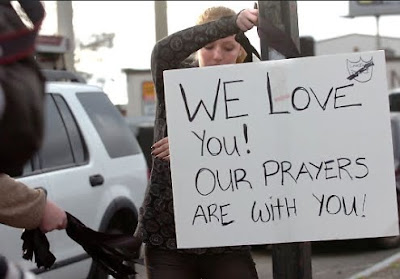 Previous post:
SEATTLE HAS STOPPED FOR OFFICER TIMOTHY BRENTON - Hundreds of police and fire department vehicles have started a procession to KeyArena for the memorial service of slain Seattle police Officer Timothy Brenton... 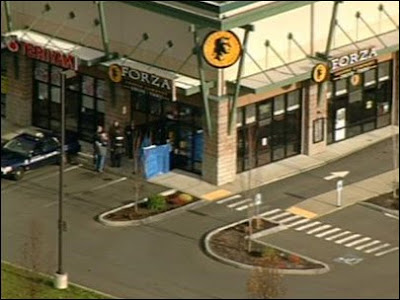 FOUR LAKEWOOD POLICE OFFICERS SHOT AND KILLED IN 'AMBUSH'
by KING5.com and Associated Press
Posted on November 29, 2009 at 9:41 AM
Updated today at 12:58 PM
[EXCERPTS] PARKLAND, WASH. - FOUR LAKEWOOD POLICE OFFICERS WERE SHOT AND KILLED SUNDAY MORNING IN WHAT AUTHORITIES CALLED A TARGETED AMBUSH AT A COFFEE SHOP. Pierce County Sheriff's spokesman Ed Troyer says the officers - four male and one female - were in full uniform and wearing bulletproof vests, sitting in Forza coffee shop near 116th Street and Steele Street on the east side of the Air Force base at about 8:30 a.m. Troyer says the officers were preparing for their shift when a suspect or suspects "walked in with a handgun, opened fire multiple times and then fled the scene," said Troyer. Troyer called it an "ambush... This was more of an execution. Walk in with the specific mindset to shoot police officers," Troyer said. Police are searching for a male suspect and interviewing witnesses... "We hopefully will have answers, but there is nothing more we can tell you," Troyer said. "That's as cold-hearted as it is." PIERCE COUNTY SHERIFF PAUL PASTOR SAID "this is an example of the danger that police officers and deputy sheriffs and state troopers face every day. The person or people who did this not only harmed us they harmed the good that we can do in the community. They harmed the good that we work to do every day in the community. This is an example of the cost that is sometimes paid by people who believe in duty and obligation and sacrifice and people who do that on behalf of the community. We've lost people that we care about, we've lost people I'm sure the good people in the community care about as well," said Pastor. WASHINGTON GOV. CHRIS GREGOIRE ISSUED THE FOLLOWING STATEMENT ABOUT THE HOMICIDES: "I am shocked and horrified at the murder of four police officers this morning in Pierce County. Our police put their lives on the line every day, and tragedies like this remind us of the risks they continually take to keep our communities safe. My heart goes out to the family, friends and co-workers of these officers, as well as the entire law enforcement community. I offer whatever support is needed to the Pierce County Sheriff in their search for the perpetrator of this terrible crime." Troyer said there were several active scenes that officers are working. A white pick-up truck was impounded from a parking lot at one scene and a person was taken into custody at another... Troyer said the suspect is a black male, 5-foot-7 to 6 feet tall, 20s to 30s, scruffy appearance, wearing a black coat with a gray sweatshirt underneath, and blue jeans... PRAYER VIGIL - A prayer vigil for the officers and their families will be held tonight at 6 p.m. at Tacoma Champions Centre at 1819 E. 72nd St. in Tacoma. Directions to the Tacoma Campus. [Full article here] 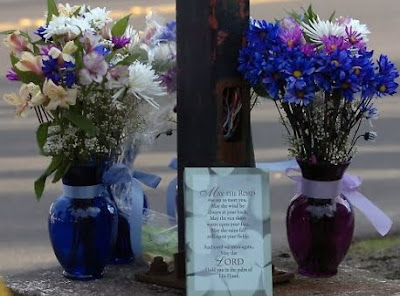 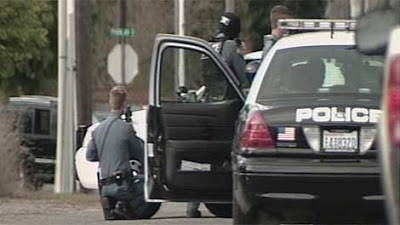 ...The shooting comes just a month after the Halloween ambush of a Seattle police officer who was shot and killed while sitting in his car...


'HORROR SCENE' AS 4 LAKEWOOD POLICE OFFICERS SHOT, KILLED
By KOMO Staff
Story Published: Nov 29, 2009 at 8:53 AM PST
Story Updated: Nov 29, 2009 at 12:59 PM PST
[EXCERPTS] LAKEWOOD, Wash. - Four uniformed police officers were shot and killed in a bloody Sunday morning ambush at a Lakewood-area coffee shop, officials said. Pierce County Sheriff's Office spokesman Ed Troyer called the ambush "a targeted attack" on the four Lakewood police officers as they were preparing to start their shifts at about 8:15 a.m. Officials at the scene said a lone gunmen burst into the Forza Coffee Co. outlet at 11401 Steele St. South, shot the four uniformed officers as they were working on their laptop computers, then fled the scene. Two baristas and a handful of other customers were inside the coffee shop at the time of the attack, but none of them were shot or injured... Troyer described the scene inside the coffee shop as "carnage and a scene out of a horror movie." Three male officers and one female officer all died at the scene. About 2 1/2 hours after the deadly ambush, officers identified a white Chevy pickup truck abandoned at 134th Street and Pacific Avenue South that is believed to be the one that the suspect fled in. Soon after, there was a standoff reported between officers and one or more people inside a residence a few blocks away. It was not immediately known if the standoff is related to the police shootings, but it was still continuing as of 12:30 p.m. A $10,000 reward is being offered for any information leading to the arrest of the suspect or any possible accomplices, Troyer said. An emergency tip line has been set up, at 866-977-2362, for callers to report any helpful information... Within minutes of the first 911 call, hundreds of investigators and police were rushing to the scene. Roads were blocked in the vicinity of the attack... The coffee shop where the shootings took place is owned by Brad Carpenter, a retired police officer, KOMO News has confirmed. The incident is being investigated by the Pierce County Sheriff’s Department, with assistance from the Tacoma Police Department, Lakewood Police Department, the Pierce County Department of Emergency Management and the Washington State Patrol Crime Lab... [Full article here] 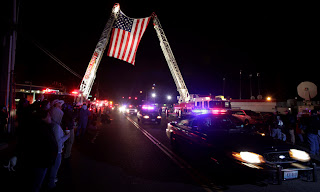 ...Within minutes of the first 911 call, hundreds of investigators and police were rushing to the scene. Roads were blocked in the vicinity of the attack... 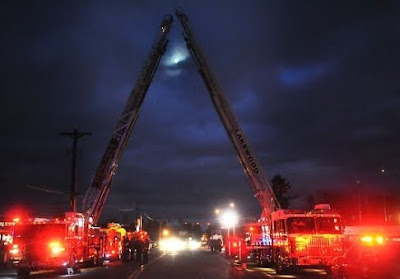 "...Our police put their lives on the line every day, and tragedies like this remind us of the risks they continually take to keep our communities safe..." 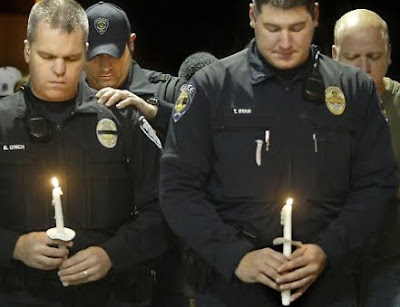 GUNMAN TARGETS, SHOOTS, KILLS FOUR POLICE OFFICERS IN SEATTLE SUBURB COFFEE SHOP
New York Daily News
By Helen Kennedy
Sunday, November 29th 2009, 4:07 PM
[EXCERPTS] Four cops were shot and killed in cold blood Sunday morning... The three men and one woman - a patrol team with the Lakewood Police Department in Lakewood, Wash. - were fully armed and wearing their uniforms and bulletproof vests as they prepared to go on shift. The cops were sitting at a table in the Forza Coffee shop with their laptops out doing paperwork when the shooter walked in and began firing at them with a pistol, authorities said... All four died instantly. The public information officer for the Lakewood Police Department broke down during an attempt to brief the press at the scene. Troyer said the reason for the chilling assassination is unknown. "We have no motive at all. I don't think when we do find out it will make sense," he said. Their police cruisers were parked out front, visible to anyone approaching. The coffee shop - part of a regional chain - is owned by retired police officer Brad Carpenter. The baristas and customers were so traumatized that it was hard to get them to calm down enough to describe what they saw, police said... The shooting comes just a month after the Halloween ambush of a Seattle police officer who was shot and killed while sitting in his car, allegedly by Christopher Monfort, a crazed former security guard who took courses in law enforcement. He allegedly also torched three police cruisers, rigged several bombs hoping to kill cops and left notes threatening all police officers. Monfort was shot in the head during his arrest Nov. 6 and remains in custody. He is due to be arraigned Tuesday. Troyer said there appeared to be no connection. [Full article here]

...About 2 1/2 hours after the deadly ambush, officers identified a white Chevy pickup truck... Soon after, there was a standoff reported between officers and one or more people inside a residence a few blocks away... 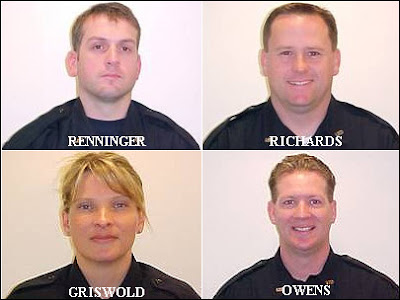 [Links above are to Officer Down Memorial Page memorials] 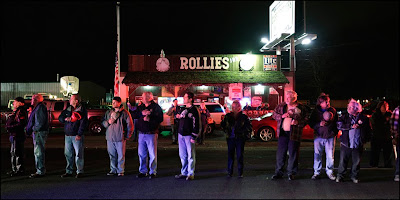 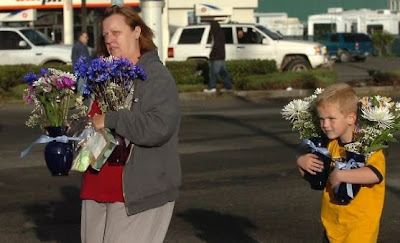 SEARCH FOR CLEMMONS LEADS POLICE TO SEATTLE HOME
By KOMO Staff
Nov 29, 2009 at 10:30 PM PST
[Excerpts] Police searching for the person of interest in the Lakewood police shooting have surrounded a home in the city's Leschi neighborhood. Spokesman Jeff Kappel said the SWAT team surrounded the home around 8:45 p.m. after receiving a tip that Maurice Clemmons may be inside. Clemmons, 37, is being sought in the deadly shooting of four Lakewood police officers on Sunday morning... THE HOME IS LOCATED JUST BLOCKS FROM THE LOCATION WHERE SEATTLE OFFICER TIMOTHY BRENTON WAS SHOT TO DEATH WHILE IN A PATROL CAR WITH OFFICER BRITT SWEENEY, A TRAINEE, LESS THAN A MONTH AGO. [Full article here] 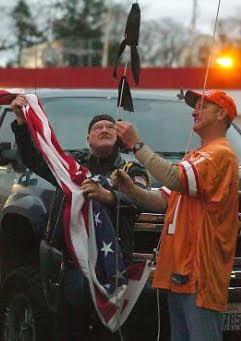 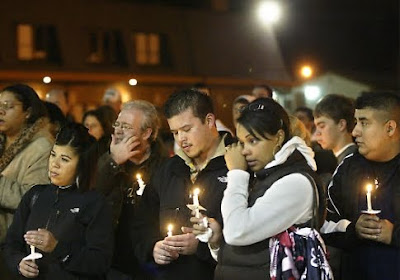 VIDEOS OF THE PROCESSION TODAY:

The President of the Lakewood Police Independent Guild, Brian D. Wurts, issued a statement...
"As I write this I am numb. We were dealt a nasty blow, good men and women I have had the honor of knowing for years are senselessly gone. There is no way to comprehend it, to validate it, or to make sense of any of it. You cannot understand evil like this, as a community we must form a solid bond against criminals and hold them accountable. I know my members and can say with certainty that as a group we will remain professional and will continue to work to protect those of you we have taken an oath to protect. If you know a cop tell them how much you appreciate them, it truly keeps us going. Please pray for these officers and their families. All of them had significant others and children who are left behind."
Source: Suspect In Murder Of 4 Lakewood Cops Eludes Police, KING5, November 30, 2009 8:42 AM

Dec 1, 5:25 AM
Listening to televised news conference. Yes Clemmons is dead. He had on him one of the slain Lakewood Police officer's weapons. This morning one officer heard movement behind him as he was checking out what appeared to be (and was) a stolen car with it's hood up - the officer turned recognized it was Clemmons coming up behind him. The officer told Clemmons to stop, show his hands, Clemmons refused, tried to run and the officer shot several rounds. People helped Clemmons and some are arrested - including the getaway driver on the day the officers where shot. Clemmons had a bad gunshot wound in the center of his abdomen from one of the officers he killed. Police will release which slain officer was able to shoot Clemmons before he died.

seattletimes: RT @KING5Seattle Police say Maurice Clemmons had a gun with him they believe was from the Lakewood homicide scene #WAShooting

KIRO7Julie: Breaking News: When Maurice Clemmons was shot this morning in South Seattle he had a weapon on him from one of the deceased officers

srockett201: Maurice Clemmons has been neutralized. Brother and sisters in blue: Remain vigilant. Be armed. Tend the sheep.
on 11/29/2009