[CA] NO! Ex-State Prison Officer Rodriguez can NOT have a new trial. 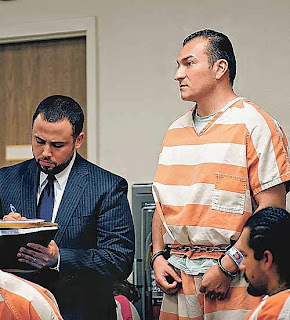 NO - Imprisoned former-Salinas Valley California State Prison Officer Timothy Rodriguez, guilty of trying to hire a hit man to kill his ex-girlfriend, can NOT have a new trial.

NO NEW TRIAL FOR PRISON GUARD WHO ORDERED HIT ON EX-GIRLFRIEND
Monterey Herald, Salinas Bureau
By Virginia Hennessey
10/25/2011
[Excerpts] A former Soledad correctional officer has lost his bid for a new trial on charges he hired a "hit man" to kill his ex-girlfriend. The 6th District Court of Appeal in San Jose upheld the attempted murder conviction of Timothy Rodriguez, saying his actions went beyond preparation to actually putting his plan in action... Rodriguez identified the intended victim, led her would-be killer to her Monterey house, described her car and how he wanted the crime committed, and gave the assassin a down payment and the PIN for the victim's credit card, which he was to use to get the rest of his fee. "You're going to pay me with her (expletive) money?" asked the man, who turned out to be Bureau of Narcotics Enforcement officer... Rodriguez, 40, was sentenced to seven years to life... [Full article here]

UNDERCOVER AGENT TESTIFIES IN SALINAS MURDER-FOR-HIRE CASE: Undercover agent testifies correctional officer wanted his ex-girlfriend killed
thecalifornian.com
Jul. 12, 2010
[Excerpts] ...Steven Somers, a Monterey County deputy district attorney, in presenting his case, called to the stand witnesses including the woman Timothy Rodriguez is accused of trying to have killed and an undercover agent who posed as the hitman. Somers also played in court the recordings of Rodriguez working out a potential deal with a confidential informant and the “hitman” in the murder-for-hire plot... [Doe] testified, upon questioning by one of the defense lawyers, that Rodriguez treated her well and was not abusive during their relationship. Doe said she had moved twice since she last spoke to Rodriguez and doesn’t know how the defendant knew where she lived... Rodriguez took the stand and testified that he asked at least five times for a lawyer – requests that were repeatedly ignored... It is unclear whether Rodriguez is still employed as a correctional officer... Steven Somers, a county deputy district attorney, played a recording in court that documents a conversation between Rodriguez, Rivera and a confidential informant. The tape includes Rodriguez taking Rivera and the informant to the home of the woman and detailing how he wanted her killed — one bullet in the head and another in the chest. Rodriguez also explains to the agent the woman's routine upon arriving home from work with her 3-year-old son, how Rivera would be paid and escape routes once the plan was carried out. According to the tape, Rivera was told he could get at least another $1,500 if he took the woman's wallet... While Rivera questions Rodriguez on why he wanted the woman killed, the defendant doesn't reveal his reasons, other than to say "it needs to be done."... [Full article here]

TRIAL RESUMES TODAY FOR EX-SALINAS VALLEY STATE PRISON CORRECTIONAL OFFICER
thecalifornian.com
Jul. 14, 2010
[Excerpts] A Monterey County judge issued a guilty verdict this afternoon for a former Salinas Valley State Prison correctional officer accused of trying to hire a hitman to kill a ex-love interest. Superior Court Judge Russell Scott found Timothy Rodriguez guilty of attempted, premeditated and deliberate murder and solicitation of murder... An alleged victim in a murder-for-hire case testified Tuesday that she had no idea a former love interest wanted her dead until after he was arrested. The woman, identified as Jane Doe in court, took the stand... Doe, an employee of the prison, testified Tuesday that she was "pretty shaken up" emotionally when she learned of the plot... ... [Full article here]

EX-SALINAS VALLEY STATE PRISON CORRECTIONAL OFFICER FOUND GUILTY IN MURDER-FOR-HIRE PLOT
The Salinas Californian
By Sunita Vijayan
July 15, 2010
[Excerpts] A judge convicted an ex-Salinas Valley State Prison correctional officer in a murder-for-hire case Wednesday, saying the defendant put a "significant amount of planning" into a plot to kill a woman he had dated. Monterey County Superior Court Judge Russell Scott found Timothy Rodriguez guilty of attempted first-degree murder and solicitation of murder, following nearly two days of testimony in a bench trial. "There is no doubt that the defendant intended to have this victim killed," said Scott... [Full article here]

EX-PRISON GUARD GETS LIFE IN MURDER-FOR-HIRE: Timothy Rodriguez Was Prison Guard At Salinas Valley State Prison
KSBW
August 27, 2010
[Excerpt] A former prison guard found guilty of trying to hire a hit man to kill his ex-girlfriend was sentenced to life in prison... When asked by an agent posing as an undercover officer why Rodriguez wanted the woman killed, he said that it needed to be done... [Full article here]

THE COURT:  The Court has received, reviewed, and considered the bail motion as written.

MR. HERNANDEZ:  Yeah.  And I'm not going to belabor the motion, but, your Honor, the two million dollar bail in this case is excessive.  It's excessive to the point it's unattainable and it might as well be no bail.  It's clearly unreasonable, and by the -- guaranteed under the Constitution, Mr. Rodriguez should have reasonable bail. It should be determined on Mr. Rodriguez's flight risk.  There should be an individualized hearing.

He's not a flight risk.  His family is in town, his friends are in town.  He has no connections really anywhere besides Monterey County.  He's deeply rooted here, your Honor. So as the bail motion notes, we'd be asking for it to be considerably lowered to a hundred thousand dollars.

MR. SOMERS:  Well, your Honor, the defendant does -- there are allegations that the defendant has committed other criminal acts.  They're included in the discovery given to the Defense.

He was engaged in a conspiracy, in a plot to smuggling drugs and cell phones into the prisons, and did so with at least two different gang members who were prisoners. One of those gang members, who was a CI in this case, he was contacted to commit murder for him.  They talked back and forth, and there was trust because of the smuggling that had been going on.

The defendant keeps -- has no address on record with CDC.  The agency he worked for did not know where he lived. He had a P.O. Box.  The cell phone they had for him was one of those throw-away cell phones where you don't have to register a name or an address, and so his cell phone was never registered in his name or address.  When CDC IA started looking into him, they couldn't find him.  They didn't know where he was.  It was only through a lot of efforts that they were able to ultimately find out, and I think they had to follow him to find out actually where he lived.

He set up this meeting with ultimately it turned out to be an undercover officer, but he didn't know that, to kill a co-worker and a former -- someone he dated years before.  He told -- he had planned this out to order -- tell the CI, on tape, that he wanted a revolver used because he didn't wanted to leave shell casings.  He wanted one to her chest, one to her head, presumably to make sure she was dead.  He wanted her purse stolen.  He wanted the Blackberry brought to him as proof that she was dead.

He had stalked her for weeks.  He knew her comings and goings.  He knew her address, even though she never provided it to him.  We found Internet research as to where she lived.  He knew that her husband was out of home and that she gets home -- the time she gets home and the time she goes to work, and suggested that that would be a good time to get her because, you know, you know when she's coming and going, and she has her three year-old -- she's putting her three year-old into the car seat.  So he was basically, without saying it, telling this undercover agent that he wanted her murdered in the presence of her three year-old son.

When he was -- after he was arrested and confronted with this, his biggest concern -- his two biggest concerns that he expresses to the officer are one, he didn't want to be in general population; and two, he was going to miss the Pittsburgh Steelers game and he had just bought a big screen TV.  His attitude towards the whole thing, in all the discussions, both when he didn't know he was being taped and when he was talking to the agents and knew he was being taped, was cold, heartless; never any expressions of remorse or concerns.  His only response to multiple questions of why he would want her killed was she needed to die.

The victim is living in terror, your Honor.  I've met with her several times.  We've worked to change her identity and move her.  She's no longer at her old address.  Her one solace is that the defendant is behind bars.  She's contemplated leaving the state or leaving the country because she doesn't know how many other people he might have tried to hire to do so, and I can't tell her he hasn't.

Your Honor, one of the considerations, A, is flight risk.  And the defendant has been told through his attorney weeks ago that the People's only position in this case is the defendant must serve life for attempted murder, so he knows that, that it's win at trial, when everything is on tape, or serve life in prison.

He also -- he also is a flight risk because the Mexican border is very close.  He could be across that border. I don't know what kind of ties he has to the gangs inside the prison.  We haven't been able to determine that, but he may have support from them in getting to where he has to go.  I'm not sure about that.  I hope he doesn't.  I don't think he does.  But we have a person who is not that connected to the community when his employer doesn't know what his address is. He may have family here, but they didn't believe that he was capable of this.  He is a flight risk.  There really is no reason for him to stay if he's let out.

Defense counsel's papers say he doesn't have -- we took his passport, but as everyone knows you can cross the Mexican border without anyone even knowing your name.  No one checks your passport, there is no controls going that direction.

And another consideration, which Defense Counsel's never mentions in there, is public safety.  And someone like the defendant, who is capable of this kind of cold, cold-blooded action to have a woman killed who did nothing to him, in front of her three year-old I would argue to the Court his obsession may cause him to just go out and get her now, himself.  I just don't know anymore dangerous of an individual than this.  This wasn't prompted by anger, and this took months to put together.  There were phone calls for months as he planned, plotted, and set up her murder, did Internet research and scoped her place out.

So there's a lot of reasons, your Honor, to keep this bail exactly where it is, and the number one is so he won't get out.

THE COURT:  All right.  Bail remain as set.  And the identities that we discussed previously would not be disclosed publicly.  They're to remain nonpublic.

MR. SOMERS:  Thank you, your Honor.

THE COURT:  For both the victim and the witness.