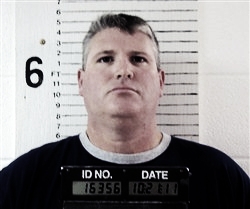 A Mustang police officer [Blaine Thomason Condreay] accused of beating his 12-year-old stepdaughter is still receiving a paycheck despite a formal charge...  “I feel strongly that the staff of the department has the integrity to investigate their own,” [Mustang Police Chief Chuck Foley] said. “I don’t feel the need to bring in an outside agency for investigations of this nature..".


MUSTANG POLICE OFFICER ARRESTED
mustangpaper.com
By Jon Watje
October 28, 2011
[Excerpts] A Mustang police officer was arrested and charged with Domestic Abuse [and Child Abuse]. Blaine Thomason Condreay, an 11 ½ year veteran of the Mustang Police Department, surrendered himself to the Canadian County Sheriff’s Office on Friday, Oct. 21 after a warrant was issued for his arrest the same day... [Mustang Police Chief Chuck] Foley said Condreay is still working at the department... Foley said an investigation into Condreay is underway on whether he will stay with the department. “I feel strongly that the staff of the department has the integrity to investigate their own,” he said. “I don’t feel the need to bring in an outside agency for investigations of this nature. I think if a thorough investigation was done over a period of time, things will fall where they will fall. We have to do what we have to do. We are going to do the right thing regardless... This does not reflect his career as a police officer,” he said. “Police officers are all humans, they all have their different relationships, situations, emotions and so on. Sometimes what they do outside of work affects their work. He’s been an upstanding member of this department for a long time and I hope he is allowed to continue to be based on the outcome of this case.” [Full article here]

MUSTANG POLICE OFFICER ACCUSED OF BEATING STEPDAUGHTER: Blaine Thomason Condreay Faces Charge Of Domestic Abuse
KOCO
October 28, 2011
[Excerpts] A Mustang police officer accused of beating his 12-year-old stepdaughter is still receiving a paycheck despite a formal charge. Blaine Thomason Condreay, of Mustang, is facing one count of domestic abuse. Condreay, who is an 11-year veteran with the Mustang Police Department, is accused of spanking his stepdaughter with a wooden paddle... Investigators said the paddling caused extensive bruising, pain and marks to the victim's lower back and back of her thigh. It was also inscribed with the words peace maker, which was specifically made for Condreay, investigators said... In December 2009, the victim told investigators that she got in trouble for stealing a $20 bill from her mother's purse, according to the affidavit. She was spanked nine times with the wooden paddle, according to the affidavit. She told police that "she could not sit for days." The girl's older brother witnessed the incident... At one point, the girl screamed so loud that neighbors began turning on their lights. The witness claims he heard the officer tell the girl "if she screamed like that again, he would hit her harder." A second incident occurred this year ... Investigators say the 12-year-old girl said she was punished because she did not clean her room. According to the affidavit, Condreay spanked her so hard that it left the words "peace maker" spelled backwards across her lower back... [Full article here]
[police officer involved domestic violence oidv intimate partner violence ipv abuse law enforcement public safety children child abuse beat oklahoma state politics]
on 10/29/2011