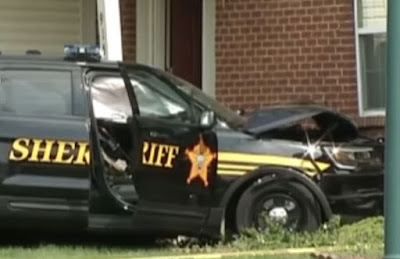 Licking County Sheriff's Deputy Johnathan Yeager is charged with domestic violence, assault and "persistent disorderly conduct" for a domestic violence incident at his home before he sped down the street

OFF-DUTY LICKING COUNTY DEPUTY SHERIFF CRASHES CRUISER INTO NEIGHBORING HOME
May 2, 2018
[Excerpts] An off-duty Licking County sheriff’s deputy became involved in a domestic dispute, got into his cruiser and crashed into a neighboring house Wednesday afternoon in Reynoldsburg... Deputy Jon Yaeger, 39, was transported to OhioHealth Grant Medical Center, where he was treated for non-life threatening issues. Yaeger has not been charged, said Reynoldsburg police, who are turning the case over to the Ohio Bureau of Criminal Investigation. Licking County Sheriff Randy Thorp said he is placing Yaeger on paid administrative leave... “Early indications are that he suffered from some type of mental-health issue”... Yaeger, who is allowed to take a cruiser home, first drove into a mailbox and then into a house... Reynoldsburg police had a bomb squad go to Yaeger’s home Wednesday to check on a report of a grenade there. A search found an inert grenade... [Full article here]

(Only this video, not it's accompanying article, mentions that the wife got a protection order. Articles mentioned his mental health, not the family's. The sheriff thought it was a good time to bring up how supportive he is of the deputies but said nothing about the safety of their families. Often wives feel they are in the police family - until there is family domestic trouble. Then usually the lines are drawn.) 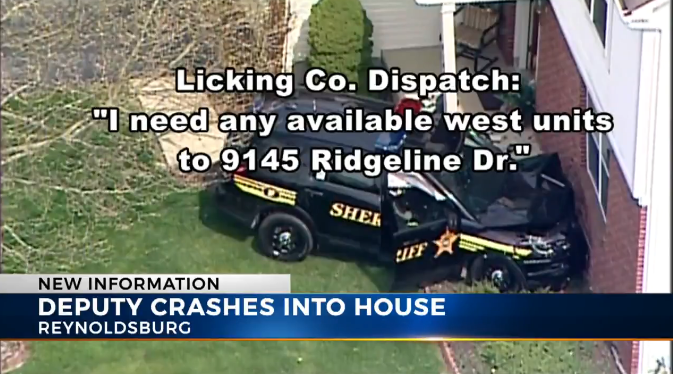 LICKING SHERIFF'S OFFICE CRUISER STRIKES REYNOLDSBURG HOME
May 2, 2018
[Excerpts] ...Reynoldsburg Police had been dispatched to [Licking County Sheriff's Office Deputy Jon] Yeager's home, which is nearby, on a report of a domestic dispute Wednesday afternoon. [Licking County Sheriff Randy] Thorp said it appeared Yeager had gotten into his cruiser, which Licking County deputies keep at their residences, and then crashed into another home nearby... Yeager is being treated for a head and left arm injury... [Full article here] 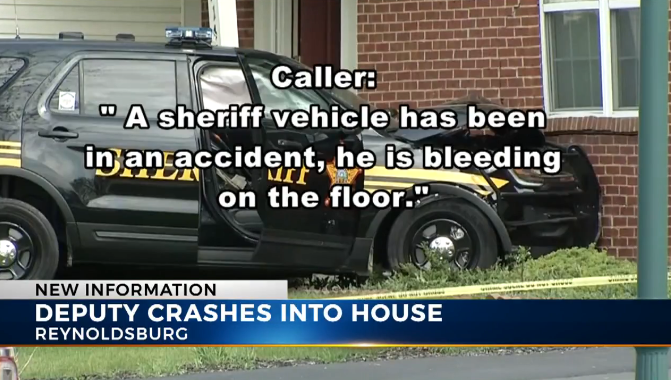 LICKING CO. DEPUTY WHO CRASHED CRUISER INTO HOME CHARGED WITH DOMESTIC VIOLENCE
May 03, 2018
g police say Licking Co. Sheriff's Office deputy Johnathan Yeager has been charged with domestic violence, assault and persistent disorderly conduct for an alleged incident Wednesday... Charges were filed in Delaware County because there would have been a conflict of interest if charges were filed in Licking County. [Full article here]

SHERIFF'S DEPUTY TO BE ON LEAVE AFTER CRASHING CRUISER INTO HOME
May 3, 2018
[Excerpts] A 10-year veteran Licking County Sheriff's Office Deputy will be placed on paid administrative leave after he is released from the hospital, Sheriff Randy Thorp said. Deputy Jon Yeager remained hospitalized Thursday morning after crashing his cruiser into a Reynoldsburg home while off-duty. The crash occurred Wednesday afternoon... Reynoldsburg Police had been dispatched to Yeager's home, which is in the area of Ridgeline Drive, on a report of a domestic dispute... Thorp said initial reports Yeager had shot himself were not correct and Yeager had not fired his weapon. Yeager was not on-duty at the time of the crash and was not heading to work. Deputies are permitted to keep their cruisers at their residences... [Full article here]

DEPUTY WHO CRASHED CRUISER CHARGED WITH DOMESTIC VIOLENCE
May 4, 2018
[Excerpts] A Licking County Sheriff's deputy who crashed his cruiser into a Reynoldsburg home Wednesday afternoon has been charged with domestic violence for events preceding the crash. Deputy Jon Yeager, 39, has been charged with domestic violence, assault and disorderly conduct, Reynoldsburg Police Lt. Ron Wright said... The charges stem from an incident Wednesday afternoon at Yeager's family home... Yeager is alleged to have assaulted his wife and then calmed down, allowing his wife to get the couple's children and her mother and leave the home... Yeager left the house a short time later in his cruiser... Wright said there was no indication Yeager was pursuing his wife. "He gets into his cruiser and drives down the street at a high rate of speed and then crashed into the house on Ridgeline"... He remains hospitalized... Wright said Reynoldsburg officers have an arrest warrant in hand for Yeager and will transport him to the Franklin County Jail after he is released from the hospital. He will be housed in Franklin County to avoid potential security or conflict of interest issues related to his work as a sheriff's deputy... Wright said charges could potentially be filed in relation to the crash as well. All three charges Yeager currently faces are misdemeanors. [Full article here]