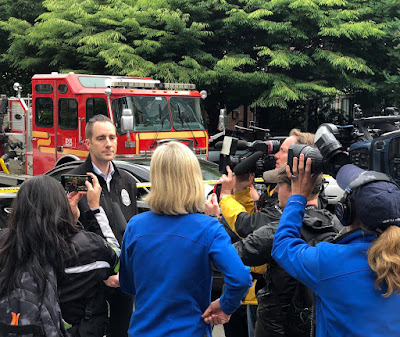 An unnamed King County sheriff's deputy who was already on admin leave and under investigation is barricaded in a standoff with Seattle police and SWAT on Capital Hill Seattle near the intersection of Olive Street and Belmont Avenue. It started as a domestic violence call to the apartment building this morning. A news conference less than an hour ago said anyone else in the apartment was able to get out and the other residents are evacuated. Police have fired flash-bang grenades and are trying to negotiate. At first they commanded him with a bulllhorn to come out with hands up, then started telling him they want to help him and get him services. In progress. Google update here. 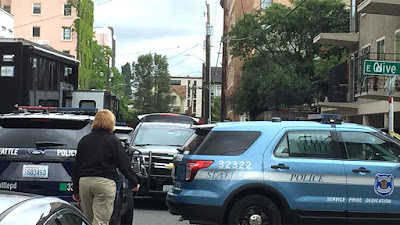 TWITTER: Seattle Police Dept.
@SeattlePD
PIO's Michaud and Whitcomb will be heading to Boren and Pine in regards to a barricaded person at a nearby apartment. Please expect additional traffic or detours due to police activity in the area. @SeattlePD will not be confirming details about the suspect at this time.
10:29 AM - 30 May 2018

[Excerpts] ...A Seattle police SWAT team breached several doors in a Capitol Hill apartment Wednesday afternoon, ending a 13-hour standoff involving a King County sheriff’s deputy accused of assaulting his domestic partner, according to police... the SWAT team detonated small charges to blow the locks and sent a remote-controlled robot into the suspect’s apartment... The SWAT team arrested the suspect in the bathroom around 3 p.m. and the man was treated for cuts to his hands but was otherwise unhurt... [Full article here]

[Excerpts] ...Officers got a report of domestic violence at around 1:30 a.m. in the 1600 block of Belmont Avenue. A man came into the east precinct to report that his boyfriend, a King County Sheriff's deputy, had assaulted him, according to a Seattle police blotter report. The victim suffered only mild, if any, injury, Seattle Police spokesman Detective Patrick Michaud said. When officers got to the apartment, the deputy refused to come out and then sprayed pepper spray under the door. [Full article here]

May 31, 2018, 4:18
[Excerpts] Police say the 13-hour standoff with a King County Sheriff’s deputy at a Capitol Hill apartment building started with an alleged domestic violence assault over a fight about groceries and sex...  “While officers were in the hallway they attempted to talk through the door with Parsons,” the report reads. “Suddenly, O/C Spray (aka Pepper Spray) started being sprayed from inside Parsons apartment along the seals of the door, therefore being sprayed out into the hallway where the 5 on-scene officers were”... Parsons told officers he had a shotgun and refused to leave his unit... Following the long standoff and arrest, police have made it a point to say that Parsons received no special treatment because he is a member of law enforcement... In court proceedings Thursday, probable cause was found for five counts of assault for the pepper spray attack on police and a domestic violence assault charge. His bail was set at $15,000. [Full article here]

May 31, 2018, 4:29 PM
[Excerpts] ...Seattle Police officers responded to Berdon Parsons’ apartment early Thursday morning, after his boyfriend came into the East Precinct to report Parsons had assaulted him by physically preventing him from leaving their residence... Officers attempted to contact Parsons by phone, knowing the sheriff’s deputy had tactical training and believing there were likely firearms inside, according to a police report. The report states Parsons declined to come out for officers, and told the sergeant on the phone that he had a shotgun. Parsons joined the King County Sheriff’s Office in December 2015, but has been on administrative leave since March 26 for a fitness-for-duty evaluation... Parsons was arrested on five counts of investigation of assault against police officers — one for each officer reported hit with pepper spray — and one charge of domestic violence (assault)... Bail was set at $15,000... His next court appearance is set for June 4... [Full article here]
[police officer involved domestic violence oidv intimate partner violence ipv abuse law enforcement public safety lethal standoff repeat rx washington state politics gay homosexual lgbt lgbtqi]
on 5/30/2018