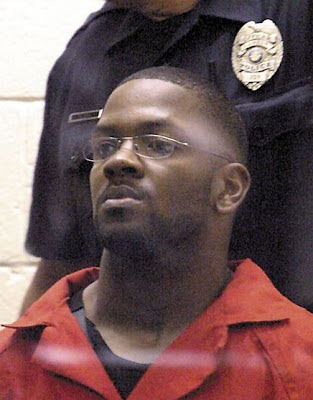 Police officer in court on charges of killing girlfriend, fetus
CentralOhio.com - 2 hours, 30 minutes ago
June 26, 2007
A police officer accused of murdering his pregnant girlfriend and her nearly full-term fetus stood behind a window separating him from a courtroom Monday when he answered to the charges with the woman's family feet away. Canton officer Bobby Cutts Jr., 30, was expressionless when a judge ordered him held on $5 million bond. Jessie Davis, 26, was missing for about a week before her body was found in a northeast Ohio park Saturday, still carrying her dead fetus. Cutts is the father of her son, and Davis' relatives have said he is the father of the girl she was due to deliver July 3 and planned to name Chloe. Cutts, who also has a daughter with an estranged wife, is accused of killing Davis and the fetus June 14 at her home in nearby Lake Township. Davis' mother, Patricia Porter, stood in the front row of the courtroom and stared at Cutts while he surveyed the courtroom audience. "I'm not sitting down when I see Bobby Cutts," Porter said later. "I wanted to make sure he knew I was there"... A man who only described himself as Cutts' uncle left the courtroom complaining that the family was shoved into the far corner furthest from the window... The uncle said the family members were the only black people in there. "That's American justice," he said. "We are suffering. We're related to the little baby, too"...
on 6/26/2007