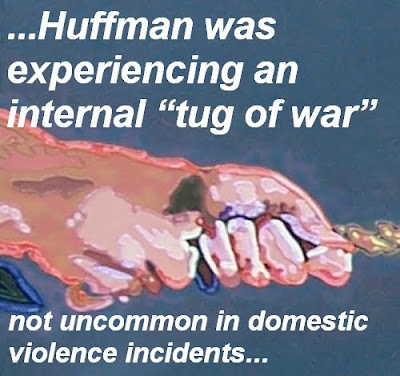 ...Deputy District Attorney Mike Fisher told the jury that Huffman was experiencing an internal “tug of war” over the incident, something not uncommon in domestic violence incidents...

Colorado Springs Police Officer Sydney Huffman didn't want to admit she broke her own restraining order the night she ended up with bruises on her neck being treated in a hospital. She lied, making up another scenario. The truth and the lie crashed into each other, Manitou Springs Police Officer Jarrott Martinez was acquitted, and now it is she who is under arrest.
...Sydney Rose Huffman said she later felt bad about agreeing to meet Jarrott Paul Martinez that night at a time when she had a restraining order against him. “If I hadn’t met him, none of this would have happened...
Excerpt from last year before Martinez's acquittal:
...The detective who later took Huffman’s report at Memorial Hospital said he saw bruise marks on her neck. She was coughing and had difficulty swallowing and turning her head, he said. Police said Martinez had a history of violence toward Huffman and other family members, including three previous strangulation incidents. Huffman said there were also unreported incidents in which Martinez held firearms to her head and to her father’s head. She also told police that Martinez had previously threatened to kill both of them and added “that if she ever called police he would kill her before the police would arrive”...