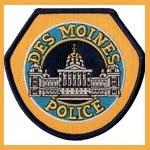 DES MOINES OFFICER, FACING ASSAULT CHARGE, IS PUT ON LEAVE
desmoinesregister.com
Tom Alex
8:27 PM, Jun. 27, 2011
[Excerpts] A Des Moines police officer charged with domestic assault with injury on Saturday is on paid administrative leave while officers conduct an investigation. Stewart Drake, 44, was arrested about 5 a.m. Saturday at his residence on the east side of Des Moines. He joined the police department in January 1990. He has been assigned to the vice and narcotics unit in recent years... Drake was released from jail Saturday on bond, but a no-contact order forbids him from entering his home or having a firearm... At some point, the discussion became physical, police said. [Alleged victim] said she ended up on the couch with Drake on top of her, holding her down with his forearm across her neck. The police report says: "She states the physical altercation happened so fast she does not remember how she got the black eye... Drake denied any physical altercation... "Stew was adamant nothing became physical," the report says. "No visible scratches or other injuries were observed - his shirt appeared normal. Stew had been drinking and alcohol could be smelled." The report goes on to say that [the alleged victim] was visibly shaken and that she "appeared to be evasive in answers relating to how the injuries occurred"... Assistant Chief David Lillard said he could not think of more than two other officers from the department charged with domestic assault in the last two decades. [Full article here]
[police officer involved domestic violence oidv intimate partner violence ipv abuse law enforcement public safety iowa state politics uncooperative non-cooperative]
on 6/28/2011