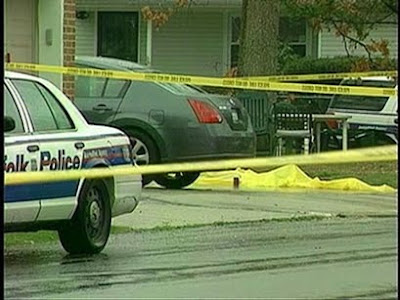 Ex NYPD Officer Darryl Fowler gets to serve the sentences for 6 serious charges concurrently instead of consecutively, while his wife Michelle has had to take each step in her recovery one after the other. What happened to Michelle is just one of the reasons victims of officer-involved domestic violence are afraid to report any crimes in the home. She reported, he was fired, he came after her, and she reported that he did... then pow pow pow pow pow. Not five shots at the same time - 5 one after the other - the same sequence Darryl Fowler should have to serve his sentences.
The article below is from early this month - and the formality of the actual sentencing is scheduled for later this month.
PREVIOUS POSTS:
EX-COP PLEADS GUILTY TO 2009 MIDDLE ISLAND SHOOTING
North Shore Sun
By Grant Parpan
June 1, 2011
[Excerpts] An ex-cop from Amityville who shot his estranged wife after breaking into her Middle Island home in 2009 pleaded guilty Tuesday to a top charge of attempted murder and will be ordered to 20 years in prison, according to the Suffolk County District Attorney’s office. Darryl Fowler, 44, entered Michelle Fowler’s home on Dorado Court on October 20, 2009, shot her and then fled the scene in his SUV, sideswiping the ambulance that was responding to the call for aid at the Fowler residence, the DA’s office said. Prosecutors testified at Mr. Fowler’s 2009 arraignment that he showed up at the house that night after learning he had lost his job after his wife filed an order of protection against him. The former NYPD officer then returned to the house for a second time after his wife filed a report at the Sixth Precinct in Selden, saying her husband had violated the order, prosecutors said. State Supreme Court Justice Robert Doyle will sentence Mr. Fowler to 20 years in prison June 28 for attempted murder in the second degree and concurrent sentences of 20 years for both first-degree assault and first-degree burglary, according to a DA press release. He will also serve concurrent sentences for criminal possession of a weapon, aggravated criminal contempt, and first-degree criminal contempt... [Full article here]
Last word was that Michelle Fowler was suing the Suffolk County Police Department for negligence. A few hours before she was shot Michelle was reported to have been assured that Darryl would be arrested right away for violating her stay away order - but he wasn't. (Could they find him? Did they try? I don't know.)
[police officer involved domestic violence oidv intimate partner violence ipv abuse law enforcement public safety lethal fatality fatalities murder new york city state politics]
on 6/12/2011