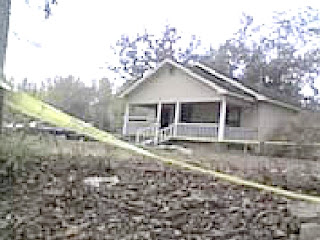 Kathy Lowe will face a third trial in November for the November 11, 2008 death of her husband David Lowe. David, a former Marshall County Sheriff's Office deputy and investigator for the Marshall County District Attorney's office, was found shot twice in the back and side, at the Horton home the couple shared.

NEW DATE SET FOR KATHY LOWE RE-TRIAL
WAFF.com
Jan 04, 2011
Kathy Lowe will not go to trial as planned January 10th. Lowe is accused of killing her husband David Lowe, a former investigator for the Marshall County District Attorney's office. Her first trial in August ended in a mistrial when the jury could not reach a verdict. Her new trial date is scheduled for November 14th. [LINK]


LOWE MURDER RETRIAL CONTINUES
WAFF.com
By Stephen McLamb
Dec 15, 2011
[Excerpts] The retrial of a Marshall County woman charged with the murder of her husband was underway Thursday in Guntersville. An ABI computer forensics expert took the stand as prosecutors hope to show Kathy Lowe wasn't even at home during some of the time she claimed she was being held hostage by her husband... She's charged with the November 2008 murder of David Lowe who was shot twice in the lower left side of his back outside the couple's rural home in Marshall County. Investigators testified Wednesday Lowe claimed she had been held hostage by David that day... they questioned Lowe about more than a dozen cell phone calls made and received during the early to late evening hours that she failed to tell investigators about. An ABI computer forensics expert testified some of those calls were made nearly nine miles away from the family's home, saying it was unlikely those calls could have been made that far away from the family home... [Full article here]

KATHY LOWE TAKES STAND IN MURDER TRIAL
WAFF.com
Dec 16, 2011
[Excerpts] Prosecutors rested their case in Kathy Lowe's murder trial Friday and she was the first person her lawyers called to the stand... The first trial ended in a mistrial. Lowe claimed her husband held her hostage the day of his death, but investigators showed that her cell phone was used nearly 20 times that day... Lowe told jurors about abuse that went back some 20 years ago... Lowe also testified to abuse David allegedly did on their son and daughter including a domestic Incident with her, in which he was arrested just months before the shooting. But on the night in question just before she shot her husband she said, "He had a cold look on his face I had never seen before." She said she pulled up her gun and shot. [Full article here]

KATHY LOWE MURDER TRIAL COULD GO TO JURY BY TUESDAY
WAFF.com
By Stephen McLamb
Dec 19, 2011
[Excerpts] ...The defense in Kathy Lowe's murder trial started presenting some of their final witnesses Monday afternoon in Guntersville. Lowe's attorney hoped to portray the victim in the case as a domestic abuser to substantiate claims that Kathy Lowe was only trying to defend herself the night she shot her husband [David]... Prosecutors claim she shot him twice in the back while she claims she was only defending herself. In testimony, Bynam Turner testified he knew the Lowes through their work at the auctions. Turner said in the last three years of his life, David became not as friendly, not as nice. Turner also testified he saw Kathy with a black eye... [Full article here]

KATHY LOWE'S DAUGHTER: 'THINGS WERE NOT GOOD AT HOME'
Sand Mountain Reporter
By Elizabeth Summers
Posted: December 20, 2011 1:30 pm
Updated: Wed Dec 21, 2011.
[Excerpts] The daughter of Kathy Lowe testified Tuesday morning for the first time ever, saying she was afraid of her father and spent part of the night he was murdered hiding behind a tree with her brother Brian. Kathy Lowe is on trial for the second time in the shooting death of her husband, David Lowe on Nov. 11, 2008... Amanda Lowe testified she and her older brother, Brian, left their grandmother's home next door to the Lowe home after Kathy Lowe called Brian telling him not to let Amanda return to the home because "things were not good at home." At that point, Amanda said, Brian grabbed a gun and the pair ran across the yard, lying in a ditch near the tree that afforded them a view of the home, carport and pool. "I saw a figure sitting on the pool steps," Amanda said. "We heard two gunshots. I saw the sparks fly from the gun"... After calling 911, she and Brian heard three more shots and ran to the house... Amanda also testified she had been afraid of her father for many years and would come home from school, get off the school bus and lock herself in her room, "sitting behind the door." She would only come out after Kathy Lowe returned home from work. "I felt a little more safe with her there," Amanda testified. "She protected us." Following Amanda's testimony, her uncle Darryl Thacker took the stand... He also testified that David Lowe had a poor relationship with his son, Brian Lowe, and often called him names, many of which included explicatives. "Brian would call me and I would come over here from my home in the Madison/Huntsville area and take him back to my house"... [Full article here]

MISTRIAL DECLARED IN KATHY LOWE'S MURDER RETRIAL
Sand Mountain Reporter
By Elizabeth Summers
December 22, 2011
Kathy Lowe will stand trial for a third time in April for the shooting death of her husband. Jurors were unable to reach a unanimous verdict following two days of deliberations Thursday. According to Judge Tim Jolley, the five-woman, seven-man jury was split five to seven over the question of guilt and innocence... David, a former Marshall County Sheriff's Office deputy and investigator for the Marshall County District Attorney's office, was found shot twice in the back and side, at the Horton home the couple shared. Kathy Lowe admitted shooting David following a day-long argument, and alleged she had been held hostage by David most of the day at gunpoint. Prosecutors countered Kathy Lowe had plotted to kill David Lowe over several months. Special Prosecutor and Blount County District Attorney Pamela Casey said following the mistrial declaration she would try the case again... Kathy Lowe, holding her head in her hands, was heard saying "I can't believe this happened again"... [Full article here]

JUDGE DECLARES MISTRIAL FOR KATHY LOWE; JURY SPLIT
Judge sets a third trial for Lowe in April 2012
WHNT NEWS 19, Sand Mountain News
Carson Clark
WHNT News 19 Reporter
December 22, 2011
[Excerpts] A Marshall County woman will face a third trial for the death of her husband [David Lowe]. Thursday afternoon, the judge declared Kathy Lowe's second trial to be a mistrial.  The jury was split. The jury told the judge on Thursday morning they were stuck, and could not reach a unanimous decision.  After hearing that, the judge urged the jury to keep deliberating. They came out with a question after 2:30 p.m.  The mistrial declaration came shortly after 3:15 p.m. After Judge Tim Jolley declared the mistrial, he scheduled Lowe's third trial for April 2012. Lowe is accused of shooting her husband, David, at their home in November of 2008 so she could collect insurance money.... In closing arguments Wednesday, prosecutors said Kathy Lowe was thinking about one topic a lot during the summer and fall of 2008: the death of her husband David. Pamela Casey, lead prosecutor, presented evidence of the things Lowe did during that summer that involved her husband's eventual death. Casey said Lowe first took a 'Do Not Resuscitate' order to the local fire department.  However, her husband had not signed off on it. The prosecutor also says Lowe spent a lot of time shopping for insurance and got one policy on her husband just a month before his death... But in the defense attorney's arguments, John Burleson told jurors the evidence shows Kathy Lowe was an abused and battered woman... Burleson also told jurors that yes, Lowe had bought insurance policies on David Lowe, but that they shouldn't read anymore into that than a woman who was trying to plan for her family's future. Lowe herself testified that she did pull the trigger that night, but it was in self defense to keep David Lowe from shooting her first. [LINK]
[police officer involved domestic violence oidv intimate partner violence ipv abuse law enforcement public safety lethal fatality fatalities murder female perp perpetrator alabama state politics]
on 1/04/2012