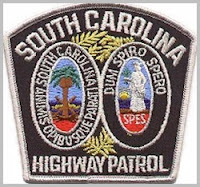 ...[South Carolina Highway Patrol Trooper Robert Keith] Owens bond was set at 5 thousand dollars on Sunday. He is no longer in the detention center...

SC TROOPER ARRESTED AFTER 3-HOUR STANDOFF
Associated Press
Tuesday, January 17, 2012
[Excerpts] Authorities say a South Carolina Highway Patrol trooper has been arrested after a standoff at his Simpsonville home. Greenville County sheriff’s deputies say they were called to a home at 5:30 p.m. Saturday because of a domestic disturbance. A woman said she had been involved in a fight with her husband.... The woman was able to escape safely. Authorities made contact with Owens, who came out of the home around three hours later and was arrested and charged with domestic violence... Owens had been on medical leave for several months after he was injured while on duty... [Full article here]

UPDATE: SIMPSONVILLE STANDOFF SUSPECT IS A SCHP TROOPER
WSPA
January 17, 2012
[Excerpts] ...A SWAT team has now left an upstate neighborhood after a standoff there ended peacefully... It happened Saturday night at a home in on Waxwing Court in the Adam's Run subdivision in Simpsonville... They say the woman got out of the home okay, but the man refused to come out for deputies for several hours. The SWAT team responded and law enforcement was able to take Robert Keith Owens into custody around 8:30pm. No one was hurt. Owens is charged with one count of Criminal Domestic Violence. Owens bond was set at 5 thousand dollars on Sunday. He is no longer in the detention center. [Full article here]

SC TROOPER ARRESTED DURING STANDOFF SATURDAY
FOX Carolina
By Casey Vaughn, Dana Wachter
Jan 16, 2012
[Excerpts] State officials said the man who was arrested during a standoff in Simpsonville on Saturday is a South Carolina Highway Patrol officer. Greenville County deputies were called to the Waxwing Court home at 5:30 p.m. on Saturday, where they met with a female victim who said she had been in a fight with her husband and he pushed her several times. While the suspect was inside the home, deputies said he made threats to harm a family pet and had a weapon, but they did not believe he pointed a firearm at the victim... The SWAT team was called to help make contact with the man... Sheriff's officials had nearby streets blocked off for three hours... "Our SWAT team is very highly trained to handle situations like this, they're very good at what they do," said Greenville Co. Sheriff's spokesman, Zach Hinton. "This is the norm, a peaceful resolution to a situation like this. And this is obviously what we want to see happen and what did happen tonight"... [spokesman for the state Department of Public Safety Sid] Gaulden said Owens is assigned to Troop 3, which includes Anderson, Greenville, Oconee, Pickens and Spartanburg counties. [Full article here]
[police officer involved domestic violence oidv intimate partner violence ipv abuse law enforcement public safety lethal suicidal south carolina state politics]
on 1/17/2012