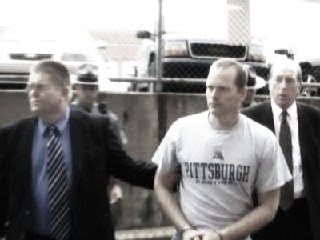 Excerpts from the news:
A state trooper was arrested in the bloody slaying of a dentist [Dr. John Yelenic] who was in the middle of an acrimonious divorce from the woman with whom the trooper was living... [Trooper Kevin] Foley likely entered the house through an unlocked back door, said Deputy Attorney General Anthony Krastek... Foley, who was jailed without bond Thursday, "had a well-known hatred for Dr. Yelenic" that he commented on daily and even told fellow troopers he prayed for Yelenic's death... Trooper Deana Kirkland advised Mr. Foley last year before the murder that he should stop talking about wishing for Dr. Yelenic's death. She said he responded, "I just can't help it."... Foley once asked another trooper if he would like to help kill Yelenic... Yelenic, who was mired in bitter divorce proceedings, hadn't been sleeping well, so he began staying downstairs, nodding off on a couch while watching television, and was known to have an occasional cocktail to chase the insomnia... Bobbi Mack, of Murrysville, another one of Yelenic's friends, said Yelenic had been threatened while he was amidst his divorce.
"It was terrible... He couldn't seem to get help legally from anybody.
I said, 'Why don't you call the police?'
He said, 'They won't help me'"...
The dentist's attorney, Effie Alexander, earlier told investigators that the victim offered her money to pay for an investigation should he be killed because he believed that Foley, as a trooper, could help cover up such a killing, the grand jury said... Neighbors heard loud noises and the sound of a fight inside the house. Nearby dogs barked. No one called police... The grand jury said bloody shoe prints in Yelenic's house matched a brand of shoe that Foley had been known to wear... Foley also was seen leaving a hockey game uninjured around midnight on April 12, 2006, and was seen the next day with a 2-inch gash above his left eye and a scratch below it... Surveillance video taken from two businesses showed a vehicle matching Foley's near Yelenic's home around the time of the murder... "This is obviously a very dark and disturbing day for the Pennsylvania State Police and law enforcement agents anywhere," said state police Commander Robert Lizik...
on 9/28/2007