Lane Judson to New York - WHO COULD CRYSTAL CALL? - 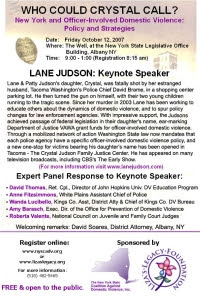 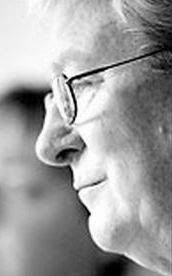 Lane & Patty Judson's daughter, Crystal, was fatally shot by her estranged husband, Tacoma Washington's Police Chief David Brame, in a shopping center parking lot. He then turned the gun on himself, with their two young children running to the tragic scene. Since her murder in 2003 Lane has been working to educate others about the dynamics of domestic violence, and to spur policy changes for law enforcement agencies. With impressive support, the Judsons achieved passage of federal legislation in their daughter's name, ear-marking Department of Justice VAWA grant funds for officer-involved domestic violence. Through a mobilized network of action, Washington State law now mandates that each police agency have a specific officer-involved domestic violence policy, and a new one-stop for victims bearing his daughter's name has been opened in Tacoma - The Crystal Judson Family Justice Center. He has appeared on many television broadcasts, including CBS's The Early Show.

For more information regarding this event, please contact:
http://lizaslegacy.org/events.htm