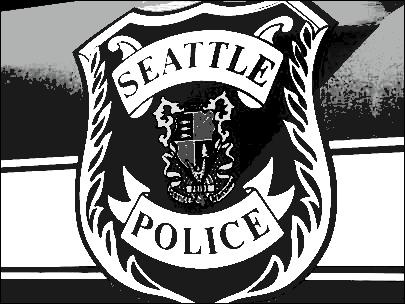 The "alleged" victim was not "seriously" injured?
The hope is that she is seriously safe.

Update: Seattle Police SWAT team member and former United States Marine, Officer Todd Charles Harris has entered a plea of not guilty, and the trial is set for June 25, 2012.

SEATTLE POLICE OFFICER ARRESTED IN DOMESTIC-VIOLENCE COMPLAINT
The Seattle Times
Posted by Craig Welch
April 24, 2012
[Excerpts] An off-duty Seattle police [Special Operations Bureau] officer was arrested by Everett Police on Sunday for investigation of misdemeanor domestic violence, according to a statement from Seattle Police spokesman Jeff Kappel released Tuesday night. The unidentified male officer has been “re-assigned to home” while the matter is investigated, Kappel wrote... Everett Police spokesman Lt. Robert Goetz confirmed the arrest but declined to offer any details about the circumstances surrounding it. “We investigated the incident, we had probable cause to believe an incident occurred, and we were mandated to make an arrest,” Goetz said. The Seattle Police Department has begun the complaint process with the Office of Professional Accountability (OPA), which will keep abreast of developments in the Everett police investigation, he said. When the Everett investigation has concluded, the OPA will conduct a separate administrative investigation into the matter, Kappel wrote... [Full article here]

SEATTLE POLICE OFFICER ACCUSED OF DOMESTIC VIOLENCE
Seattle Post Intelligencer
Tuesday, April 24, 2012
[Excerpt] ...Lt. Robert Goetz of the Everett Police Department said the alleged assault victim was not seriously injured and was not taken to the hospital. Goetz also said the case would be handled by the Everett Municipal Prosecutor and not the Snohomish County Prosecutor. The department has initiated a complaint with the Office of Professional Accountability, and the OPA will keep an eye on Everett PD's criminal case for developments. When the criminal case is wrapped up, OPA officials will begin their own investigation to the officers conduct. SPD officials would not comment further on the case. [Full article here]

SEATTLE COP PLEADS NOT GUILTY TO DOMESTIC-VIOLENCE CHARGE
Seattle Times
By Steve Miletich
April 25, 2012
A Seattle police officer has pleaded not guilty to a charge of fourth-degree assault, stemming from his arrest Sunday in what Seattle police described as an off-duty domestic-violence incident in Everett. The officer, Todd Charles Harris, 43, entered his plea Monday in Everett Municipal Court, according to court records. A trial was set for June 25. Everett police Lt. Robert Goetz declined to provide details... In a news release that didn't name Harris, Seattle police said the officer has been reassigned to his home while the investigation continues. An internal-investigation complaint has been filed with the Seattle police Office of Professional Accountability... Harris was suspended for 10 days in 2004 after the department found that on at least four occasions he mishandled drugs and paraphernalia he had confiscated while working off-duty... In another domestic-violence case, a Seattle detective was arrested last year in Leavenworth by Chelan County sheriff's deputies who saw him dragging his girlfriend by her hair and coat across a gravel parking lot near an Oktoberfest venue. He was charged with fourth-degree assault but entered into a deferred-prosecution agreement with prosecutors... [Full article here]