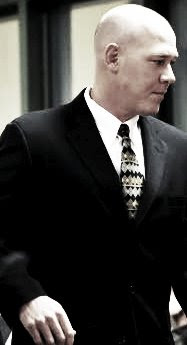 ...The conviction would be Kessler’s second for a domestic-related incident... No internal investigation had been done, and none will be now that Kessler is no longer a city employee...

Previous post:
[WI] AGAIN Officer Kessler is in trouble for domestic violence - ...described as a weekend-long argument that escalated from name-calling to physical abuse. The alleged victim, Kessler's girlfriend and the mother of his young child, reportedly recanted... Prosecutors relied on her initial statements... In 2004, Kessler was charged for pointing his duty handgun at his then-girlfriend's head...

POLICE OFFICER QUITS AFTER CHARGES FILED
Kenosha News
BY JESSICA STEPHEN
jstephen@kenoshanews.com
February 18, 2009
[Excerpts] Minutes after criminal charges were filed Tuesday against a Kenosha police officer accused of domestic violence, he resigned from the police department. Kurtiss J. Kessler, 35, of Kenosha, was charged with misdemeanors for alleged disorderly conduct and battery, both related to domestic abuse. If convicted, he faces one year in jail. The conviction would be Kessler’s second for a domestic-related incident. In a sign that he may not challenge the charges, Kessler’s lawyer asked for a plea hearing... Kessler is set to enter pleas March 17 before Kenosha County Circuit Judge Wilbur W. Warren III. Sentencing could happen that same day... Kessler, a Kenosha police officer for more than 11 years, was suspended without pay from the police department after he was arrested Feb. 9 for allegedly pushing his girlfriend, pulling her hair and hitting her with a shoe... No internal investigation had been done, and none will be now that Kessler is no longer a city employee... The criminal complaint filed Tuesday alleges that an argument between Kessler and his girlfriend, the mother of his nearly 2-year-old son, turned violent... The woman told sheriff’s deputies that she wanted to report the incident, but she did not want Kessler to lose his job. Prosecutors said she has considered recanting her statement. Kessler has a previous conviction for a 2003 domestic-related incident. He was accused of pointing a gun at his then-girlfriend’s head. Kessler pleaded guilty to three misdemeanors. He served three days in jail, paid a fine and had two years probation. He also was suspended from the police department for 55 days without pay, but allowed to return to work. [Full article here]
[police officer involved domestic violence]
on 2/27/2009