[MD] Of Baltimore Officer Tshamba: "He's losing his job, going to jail, and the family is going to win the lawsuit." 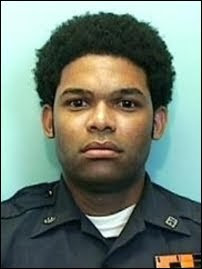 From earlier this month:
...Baltimore Police have been searching for Tshamba, a 15-year- veteran of the police force, for the past week...


Baltimore will pay - but no amount of money can breathe life back into the bullet-riddled body of Tyrone Brown or heal the hearts of Brown's family. The attorney for the shooter -Baltimore Police Officer Gahiji Tshamba - says the officer put himself on duty and was responding to the sexual assault of his girlfriend (an alleged butt pat) while in fear of his own life, when he shot unarmed Iraq Veteran Tyrone Brown 9 times, killing him. What? The scene was a bar, Officer Tshamba was armed and drinking? Officer Tshamba fled after the shooting? Hid? Caused a manhunt? He's driven drunk  - and shot a man before while drunk? Those incidents were minimized and Baltimore Police kept him? Well then.
HOW IS THIS POLICE OFFICER STILL ON THE FORCE?
Baltimore Sun Webblog
June 7, 2010
[Excerpts] So now we know that Baltimore Police Officer Gahiji A. Tshamba, back in 2005, was intoxicated when he shot a man in the foot during a confrontation. What we don't yet know -- and hopefully answers will come today -- is how Tshamba managed to retain his badge after the incident? Tshamba, as we all know by now, is the off-duty officer who shot ex-Marine Tyrone Brown six times in Mount Vernon early Saturday after Brown patted the officer's female companion on the buttocks... Either way, police have been unusually blunt in calling this a troubling shooting and saying they are trying to determine whether Tshamba was intoxicated when he shot 13 tiimes. The officer has refused to make a statement and declined to submit to breath test. He has been put on administrative duties. A police spokesman said detectives have not found any reason to believe the officer's life was in danger... So that brings us back to September 2005... Police and prosecutors ruled the shooting justified but disciplined him for being intoxicated on the job. I suppose you can be imparied by alcohol and still be justified in using your weapon -- escaping criminal liability -- but it's hard to imagine keeping a guy on the force under such circumstances... [LINK]

ONE COMMENTER SAID:
"Im disturbed by the fact that this officer has had a number of prior shootings and still carrying his gun. He is not mentally fit for duty. If I had not taken a breathilizer I would have been arrested immediately at the scene. I am tired of the double standard when it comes to cops. He's losing his job, going to jail, and the family is going to win the lawsuit against the City." 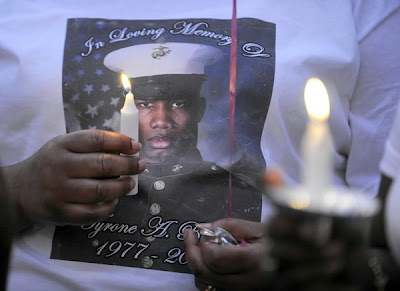 ‘LIFE IS TOO SHORT’ — GUNNED-DOWN MARINE‘S LAST WORDS HAUNT BAR PATRON: Former U.S. Marine Tyrone Brown was gunned down Friday night in Mt. Vernon by an off-duty police officer.
Investigative Voice
By A.F. James MacArthur
Wednesday, 09 June 2010 01:27
[Excerpts] “Life is too short.” Those were some of the last words spoken by former Marine Tyrone Brown moments before he died in a hail of bullets, according to a patron of Eden’s Lounge who was in the bar the evening the deadly shooting occurred... Both sides agree Brown’s encounter with a female companion of Tshamba started the conflict. Brown's sister says he was being friendly and meant no harm. Police say Brown made unwanted advances and was confrontational. But in an exclusive interview with Investigative Voice, a patron who encountered Brown at Eden’s Lounge just prior to the deadly shooting said the vet was friendly and kind. “He came up to us and said, ‘Why are you guys sitting there with your face looking so long? It’s a nice night, you came out to have a good time, you need to be happy and enjoy the moment,’ ” said Marcia, a regular patron of Eden’s Lounge... “He kind of just walked over to us; he had one arm on my chair, he didn’t seem threatening or anything... He said, ‘Don’t be sad, life is too short. Whatever is going on, whatever your situation is, it doesn’t matter. “Just be happy.’... He said he had to find his sister.” When Marcia heard that Brown had died and that he had been sexually aggressive with a woman after he left the bar, she was skeptical considering his behavior towards her just prior to the shooting... “He could have been sexual towards my girlfriend and me but he wasn’t. I don’t understand how he went from being jovial and casual to an aggressive fighter”... Police confirmed that Brown was shot nine times in the chest and groin area by Tshamba. Detectives found 13 shell casings at the scene... [LINK]

SEARCH INTENSIFIES FOR BALTIMORE POLICE OFFICER INVOLVED IN OFF-DUTY SHOOTING
WTOP
June 12, 2010
[Excerpts] Baltimore Police are searching for a police officer involved in the shooting death of an ex-Marine.
Police have obtained an arrest warrant for Officer Gahiji A. Tshamba in connection of shooting Tyrone Brown last Saturday morning. Brown was enjoying a night on the town and was shot nine times outside a Mount Vernon club... Baltimore Police have been searching for Tshamba, a 15-year- veteran of the police force, for the past week and an arrest warrant was issued Friday... Detectives believe Tshamba is attempting to avoid capture and may have possibly left Baltimore. He faces first-degree murder charges... "These charges are extremely serious," said Anthony Guglielmi, chief of public affairs with the Baltimore Police Department. "It is an affront to the men and women who wear the police uniform in Baltimore"... [LINK]

NO BAIL FOR OFFICER CHARGED IN FATAL SHOOTING
wtop.com
June 14, 2010
[Excerpts] A Baltimore police officer accused of shooting an unarmed man a dozen times outside a nightclub has been ordered held without bail. Officer Gahiji Tshamba turned himself in early Sunday morning, more than a day after he was charged in a warrant with first-degree murder in the death of 32-year-old Tyrone Brown. The victim was a former Marine and Iraq war veteran. Prosecutors characterize Tshamba as an extreme risk to public safety in arguing for him to be held without bail on Monday... [LINK]

SCRUTINY OF TSHAMBA COMES TOO LATE - Our view: The conduct of the officer charged in a fatal shooting outside a Mount Vernon club should have led to questions about his fitness for duty long ago
Baltimore Sun
June 14, 2010
[Excerpts] With the surrender of Baltimore Police Officer Gahiji A. Tshamba and his booking on first-degree murder charges in the fatal shooting of ex-Marine Tyrone Brown comes the necessary call by the city police union chief to consider the accused innocent until proven guilty. Mr. Tshamba has not given his side of the story, as is his right, and the matter of whether he will be held criminally responsible for the late-night shooting outside a Mount Vernon club — and for what offense — is ultimately up to a jury to decide. But regardless of whether Mr. Tshamba is ever found guilty, it is clear that the killing of Mr. Brown was tragic and senseless. He was not armed. The action that reportedly raised Mr. Tshamba's ire — the inappropriate touching of the officer's girlfriend — did not justify a violent response of any kind, and according to witnesses, Mr. Brown had his hands in the air when the firing began... It's also not too early to question whether the Baltimore Police Department should have had reason to take him off the force long before he wound up in that alley just over a week ago... In 2005, he was driving drunk and got into an altercation with a group of young men in another car who shouted racial epithets at him. That incident ended with Mr. Tshamba shooting one of them in the foot... [LINK] 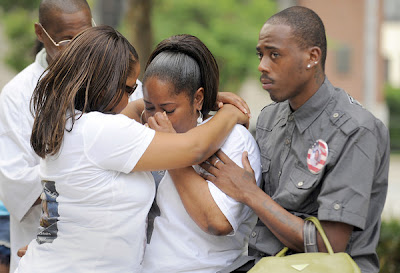 TSHAMBA HELD WITHOUT BOND; ATTORNEY BEGINS DEFENSE
Baltimore Sun Webblog
June 14, 2010
[Excerpts] ...Addressing the incident for the first time, a defense attorney for Officer Gahiji A. Tshamba, 36, described his client as a decorated veteran who has been devastated by the allegations. He said the June 5 killing of Tyrone Brown came after the officer put himself on duty to respond to a sexual assault... "A police officer in fear for his life has to do what he has to do," attorney Adam Sean Cohen told reporters outside Central Booking. "If one shot doesn't work, if two shots don't work … you fire until the threat is gone."... [LINK]

FRIENDS, FAMILY RECALL SHOOTING VICTIM'S SENSE OF HUMOR, DUTY: Former Marine, killed in altercation with off-duty city officer, 'took care of us'
Baltimore Sun
By Jean Marbella
7:20 p.m. EDT, June 16, 2010
As a Marine reservist, Tyrone A. Brown committed to six years of active drilling, which he fulfilled in 2004, followed by two years in which he would be available for call-up if necessary. But just after he left its active ranks, his unit learned it was going to Iraq. "He came back just for us," his friend and fellow Marine corporal Chris Palmerino said in an interview. "He had already fulfilled his six-year obligation." As others would also say at Mr. Brown's funeral on Wednesday, Mr. Palmerino said his platoon leader "took care of us." Mr. Brown, 32, died not in Iraq but in his hometown of Baltimore, shot to death June 5 after an altercation outside a Mount Vernon bar with an off-duty Baltimore policeman angered that he had inappropriately touched a woman who was with the officer. Gahiji A. Tshamba has been charged with first-degree murder... Mr. Brown's two children, Jade and JacQuan, read poems, and musicians — including a childhood friend, Curtis Warren, a saxophonist — offered songs. Tributes from elected officials, including Mayor Stephanie Rawlings-Blake, Sen. Barbara A. Mikulski and Rep. Elijah E. Cummings, were read. Soon, it would be time for his fellow Marines, some dressed in the same uniform that Mr. Brown was buried in, to assemble for a final march. His former boss, Gunnery Sgt. Ken Johnson, told the crowd that he'd made sure Brown's ribbons and buttons were straight and that his brass shone because he would't let him check into heaven looking bad — although, being a Marine, he used a more colorful term. "Marines never die, we merely go to heaven and regroup," Sergeant Johnson said to appreciative chuckles. "I do believe God prepares a special place for Marines." Mr. Brown's flag-draped coffin was borne out of the auditorium and taken to the Garrison Forest Veterans Cemetery in Owings Mills, where he was buried... [LINK]