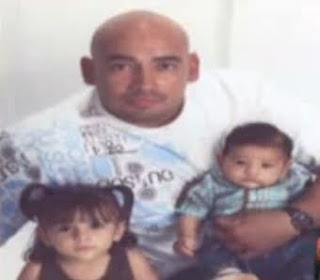 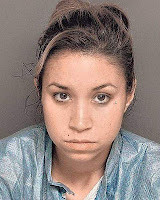 California Department of Corrections Officer Emma Beatriz Jaime killed her new husband California Department of Corrections Officer Ramon Jaime in front of his two young children after he wouldn't cook for her. Although a Monterey County pathologist determined the act was likely intentional because of the force needed to drive the blade into Ramon's heart, the judge accepted that it was an accident and sentenced her to a 6 year prison sentence. Both Jaime and Ramon were employed at Salinas Valley State Prison.

Is she that cute or was it the tears? Would the sentence have been different if this was not law enforcement related? What else explains this?

God be with the families.

A Greenfield woman was sentenced Tuesday morning to six years in prison for the stabbing death of her husband on New Year's Day.

Jaime, 23, pleaded guilty last month to voluntary manslaughter in the killing of her husband, Ramon Jaime, 27, in their home on the 600 block of Vasquez Avenue.

Inside the courtroom, her voice cracked from crying as she offered an apology.

"I'm sorry to the family, to his kids, to my family," she said before the judge announced the sentence.

"I know it's not enough," she said to the judge.

During Jaime's preliminary hearing in January, a videotape of her being interviewed by a county District Attorney's Office investigator was played in court. In the video, Jaime described the final moments of her husband's life.

She told the investigator that the argument with her husband was initiated by his refusal to fix her a meal in the kitchen.

A heated physical and verbal altercation ensued, Jaime said, resulting in her clutching a knife to her chest with its blade pointed toward her chin. The kitchen knife ended up 5 inches into her spouse's heart.

During Tuesday's sentencing defense attorney Thomas Worthington said Jaime recalls her husband charging at her and the knife somehow hitting him. In light of time already served in Monterey County Jail, Jaime has five years and one month of her prison term remaining.

"On behalf of my family...six years is nothing compared to what you have done to our family," said Tony Jaime, the victim's older brother, who lives in King City.

"You have taken my brother away," he said.

Tony Jaime told the court that his brother was a peaceful person. In Ramon's 27 years of life, he had never gotten into a physical fight with anyone, he said.

Isabel Jaime's eyes filled with tears as she talked about her son's good character and how hard-working he was. He served in the Marines for four years, survived Iraq for nearly one year and later became a correctional officer for the Salinas Valley Prison in Soledad, where he met Emma.

"He was a good son and a good father. [Emma Jaime] took the peace in my life, she destroyed my family. My last memory is of him holding his kids," Isabel Jaime said.

Ramon's ex-wife, Rebecca Jaime, said it has been difficult to explain to her two children — a 3-year old son and 4-year old daughter — what happened to their father.

"[Emma Jaime] broke my family, and if that wasn't enough, she took him from his kids," she said.

After the hearing, Emma Jaime's mother, Maria Benavides, said she loves her daughter and doesn't believe she meant to kill her husband.

"My prayers are with the Jaime family," Benavides said, "that one day, they will be able to forgive my daughter."

MONTEREY, Calif. -- A 24-year-old correctional officer pleaded guilty Friday to voluntary manslaughter in the Jan. 1 fatal stabbing of her husband, according to the Monterey County District Attorney's Office.

Both had graduated from the California Department Correctional Office Academy and worked as Salinas Valley State Prison.

The two had been married less than eight months when Emma Jaime killed Ramon with a single stab wound to the chest, the district attorney's office said.

Jaime called 911 and told the dispatcher she had hit her husband with a knife and he needed help. Ramon Jaime's two children from a previous marriage, ages 2 and 4, witnessed the attack.

Jaime told investigators she was not afraid of her husband but was angry with the way he spoke to her, the district attorney's office said. She said she pulled a large knife from the drawer and asked him to kill her.

Emma Jaime told investigators Ramon Jaime then tried to grab her arms, and the knife accidentally penetrated his chest.

However, a Monterey County pathologist determined the act was likely intentional. The knife went five inches into Ramon Jaime's chest cavity and penetrated the heart, meaning significant force was used.