[MI] Grand Traverse Sheriff's Deputy Kipp Needham's domestic: "You're going to have to kill me" 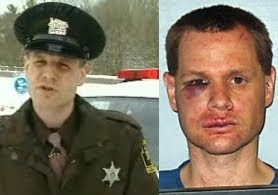 Although Deputy Kipp Needham said that arrestinig officers would have to kill him, the officers didn't. Anyone else - they would have. He is said to have choked a trooper and punched the trooper REPEATEDLY in the face. He was armed - cocked and loaded. There's no clue in the news given to what he did to his wife and his daughter when he assaulted them. OF COURSE his wife wants the protection order dropped. Of course she does. And to his defense attorney and boss, OF COURSE this is an isolated incident materializing out of nowhere. OF COURSE it is.
How will the problem find remedy where no problem is acknowledged?
News Excerpts:

Police say a 12-year veteran Grand Traverse County Sheriff's deputy turned on them, after assaulting his own family... Michigan State Police responded to a domestic situation at the deputy's home... At some point, the troopers say Needham had a loaded and cocked semi-automatic pistol... Needham tried to run from the officers... Needham punched one of the troopers in the face several times... He faces four charges, including domestic violence against two family members and assaulting a police officer [LINK]

Video
Dispatchers could hear a woman screaming in the background... Needham told deputies, "You will have to kill me."

...Police say Needham attacked members of his family, had a loaded gun while drunk, and fought and tried to choke the trooper who tried to arrest him. His defense attorney says it was an isolated incident brought on by a "one-time set of factors"... "Very surprised and actually shocked at what happened," says Sheriff Tom Bensley. "Deputy Needham has been an excellent officer for the time that he's been with the sheriff's department." [LINK]

Video
...Deputy Needham assaulted family members, had a locked and loaded firearm during incident... Sheriff: "This is a one time occurence..."

...Authorities on Tuesday charged Kipp Alan Needham, a 12-year member of the sheriff's department and its 2007 employee of the year, with assaulting, resisting or obstructing a police officer causing injury, possessing a firearm while intoxicated and two counts of domestic violence. The assault charge is a felony punishable by up to four years in prison and/or $5,000... Police told Needham to remain on the ground, but he allegedly ignored their orders. Needham ran toward the patrol vehicle, slid his county-issued, loaded semi-automatic pistol toward police and said, "You're going to have to kill me," court records show. Needham ran to the backyard, and police gave chase with a Taser in hand. He then punched and choked a trooper, police reports show. Another trooper helped restrain Needham, and they repeatedly struck Needham in the head and handcuffed him... [LINK]
[police officer involved domestic violence oidv intimate partner violence (IPV) abuse law enforcement public safety preferential lethal michigan state jail]
on 6/25/2010