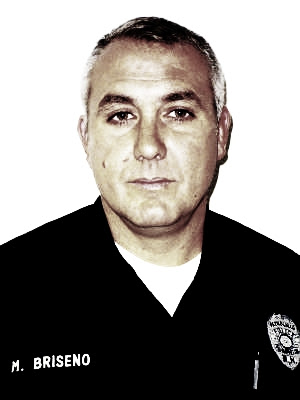 CONTROVERSIAL OFFICER CALLS IT QUITS
The Daily Times
By Elizabeth Piazza
02/12/2011
[Excerpts] A Farmington police officer long embroiled in controversy over allegations of police brutality and misconduct, resigned over yet another allegation of a domestic violence incident, this time involving his girlfriend... Mike Briseno, 46, a nearly nine-year veteran of the department, resigned Thursday following an internal affairs investigation looking into the alleged domestic incident with his girlfriend who also is a Farmington police officer... "We investigated it internally and sustained complaints against Briseno," Police Chief Kyle Westall said in a phone interview Friday. "Directly after we sustained (the complaint) he resigned before we made it to the disciplinary process"... The details surrounding the alleged incident remain unclear and Westall, citing the internal investigation, declined to release any specifics. Westall, upon learning of the allegations, requested the state police conduct an external investigation. State police officers did not file criminal charges against Briseno following the investigation, state police Sgt. Ron Foreman said. "She didn't want to give a statement and she didn't want to do a report of any kind," Foreman said of the alleged victim... The Daily Times made a public records request Friday for the state police investigation report. Briseno has a history of allegations of police brutality and misconduct... Briseno, before becoming a Farmington police officer, worked for the Bloomfield Police Department, where he was investigated on 22 allegations of police misconduct... [Full article here]
[police officer involved domestic violence oidv intimate partner violence (IPV) abuse law enforcement public safety new mexico state politics mum repeat hx]
on 2/14/2011