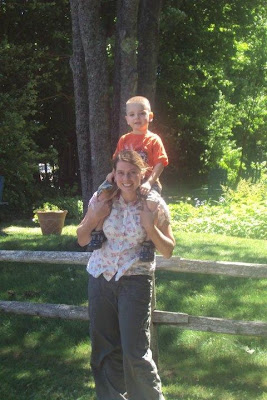 Holly Marie Drake Dembie with her son William Jr.
...[Holly] Dembie’s mother, Cheryl Foldes, rejected the allegation that her daughter was abusive or could have even physically assaulted William Dembie, who served in the U.S. Marine Corps and the Army National Guard. “She was not a batterer, she was a nurturer,” Foldes said...

TRUST FUND SET UP TO HELP MURDER VICTIM'S SON
19 Action News
Posted: Aug 15, 2011 6:55 PM PST
Updated: Aug 16, 2011 2:27 AM PST
[Excerpt] A fund has been established to help the son of murder victim Holly Dembie. The account is set up at First Merit Bank for William A. Dembie. If you would like to help, you can make donations at any First Merit Bank and tell them you have a deposit for the William A. Dembie Benevolent Fund [Full article here]

HOLLY DEMBIE’S FRIENDS COME TOGETHER TO BRING HOPE TO TRAGEDY
The Morning Journal
By Adam Mawson
Tuesday, August 16, 2011
[Excerpts] Friends of murder victim Holly Dembie are coming together to put a glimmer of hope in an overwhelmingly tragic situation. Dembie, 33, of Grafton, was a special education teaching aide with the Midview School District. Her husband, William Dembie, 42, a Lorain County Sheriff’s corrections officer, is accused of murdering her Thursday... Holly Dembie left behind a 4-year-old son... Donations can be made at any FirstMerit Bank location. Also wanting to honor the memory of Holly Dembie, is Brandon Light, a North Ridgeville High School classmate of hers from the class of 1996. He has set up a Facebook page, “Porch lights for Holly Drake Dembie”... “I started the page basically over guilt. I needed to do something. I am harboring guilt for not getting more involved in her life,” he wrote. “Had I known more, had I realized that things were going to end this way, I would’ve helped my friends drag her ass out of there.” [Full article here]

CORRECTIONS OFFICER JAILED IN WIFE’S DEATH RESIGNS
Chronicle-Telegram
Filed by Brad Dicken
August 16th, 2011
[Excerpts] William Dembie Jr. has resigned from his post as a corrections officer at the Lorain County Jail... Lorain County Sheriff Phil Stammitti said that Dembie resigned Monday during a meeting in Erie County with Lt. Jack Hammond, the administrator of the Lorain County Jail. Stammitti said his office had been preparing for disciplinary hearings for Dembie, who had been on unpaid leave since his arrest... [Full article here]

OFFICER ACCUSED OF KILLING WIFE RESIGNS
News-Herald.com
By Kelly Metz
Wednesday, August 17, 2011
[Excerpts] Corrections officer William Dembie resigned from the Lorain County Sheriff's Office effective immediately, according to Capt. Jim Drozdowski... Drozdowski said [Lorain County Sheriff's Jail administrator Lt. Jack] Hammond would have had to draw up a report about Dembie's conduct and a pre-disciplinary hearing would be held. Rather than go through the process, Dembie decided to resign... [Full article here]

ABUSE ALLEGATIONS ON BOTH SIDES IN DEMBIE STABBING CASE
Chronicle-Telegram
Filed by Brad Dicken
August 17th, 2011
[Excerpts] Former Lorain County Jail Corrections Officer William Dembie Jr. was abused by his wife, whom he is accused of stabbing to death last week, his attorney said Tuesday. Defense attorney J. Anthony Rich said William Dembie, who resigned from his job on Monday, endured years of psychological and physical abuse at the hands of Holly Dembie, who worked with special needs children at Midview Schools. “He’s a classic battered spouse,” Rich said of Dembie, who is jailed on charges of murder and domestic violence. Holly Dembie’s mother, Cheryl Foldes, rejected the allegation that her daughter was abusive or could have even physically assaulted William Dembie, who served in the U.S. Marine Corps and the Army National Guard. “She was not a batterer, she was a nurturer,” Foldes said... “She thought she had married an American hero,” Foldes said. “But she married a man who was damaged”... Sheriff’s Sgt. Donald Barker has said that William Dembie told investigators that he and his wife had been discussing a divorce. He also said Dembie told them that an argument had escalated into a violent confrontation that night. Barker said Tuesday that Dembie never mentioned anything to him about being the victim of abuse. Foldes said she believes William Dembie felt rejected by her daughter, even though he didn’t seem happy with their marriage either. William Dembie’s first marriage, which gave him three children, also ended in divorce and left him angry, she said... “All that hatred and anger fell on her,” she said... Although Rich declined to elaborate on what his client said occurred that night, he believes a more appropriate charge would be voluntary manslaughter. That charge, he said, deals with killings committed by someone who has been provoked into a “sudden passion or in a fit of rage”... Rich said he intends to ask for his client to receive a lower bond during a hearing scheduled for Thursday in Elyria Municipal Court. The current bond is $5 million, which Rich called “excessive”... [Full article here]
[police officer involved domestic violence oidv intimate partner violence ipv abuse law enforcement public safety lethal fatality fatalities murder ohio state politics rest in peace funeral]
on 8/18/2011