Barbara Sheehan on why she killed her NYPD Sgt. husband 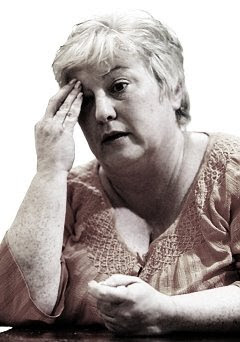 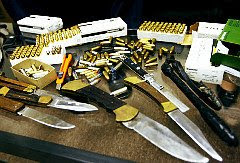 ..."I was in triage and he was outside in the car, and he called me on the cell," she said. "He said he had bullets in his pockets, two guns on him and if a police car pulled up, he'd know I told them, and he would find my father and my daughter and go down in glory." She left the hospital before treatment...

Why Barbara Sheehan shot her NYPD sergeant husband dead
In an exclusive interview, Barbara Sheehan told the News that her abusive husband 'probably would have killed me.'
By Patrice O'Shaughnessy
NEW YORK DAILY NEWS
May 3rd 2008, 8:03 PM

Ammunition and knives found in the nightstand of retired NYPD crime scene sergeant Raymond Sheehan. He told his wife his forensics expertise would let him get away with anything.

Her husband kept hundreds of bullets and 11 knives in his nightstand. He carried a gun in his pocket and threatened to kill her family and "go down in glory" if she reported him.

His forensics expertise would let him kill her and get away with it, he told her - and he punched her, kicked her and held a gun to her head.

For 18 years, Barbara Sheehan says, she put up with abuse from her ex-cop husband Raymond, until one day last February, when he terrorized her for the last time, and she shot him dead while he shaved.

"I think he probably would have killed me... he was just totally out of control by then," Sheehan, 47, told the Daily News in an exclusive interview as a grand jury weighs murder charges against her.

In a shaky voice, her hands wringing a tissue, Sheehan painted a picture of the classic battered wife, and graphically described the final fight of her 24-year marriage to the retired NYPD crime scene unit sergeant.

On Feb. 17, the day before she shot him 11 times with his guns in their Howard Beach, Queens, home, they visited their son, Raymond, at his college in Connecticut.

"We got in the car and hadn't left the parking lot and he punched me in the nose," she recalled, because she refused to go to Florida with him. She bled the whole way home, and he took her to St. John's Hospital in Queens.

"I was in triage and he was outside in the car, and he called me on the cell," she said. "He said he had bullets in his pockets, two guns on him and if a police car pulled up, he'd know I told them, and he would find my father and my daughter and go down in glory."

She left the hospital before treatment.

She said her husband woke her up the next day and threw her out of the house in the rain. He said he wouldn't let her back in until she agreed to go to Florida with him, but she was afraid to go because during their last vacation, in July, 2007, he attacked her, she said.

Sheehan fled to her friend's house, but then went back home because she was "afraid not to."

Sheehan and the friend had a coded message to make sure Sheehan was okay. The friend called the house and Sheehan's cell phone twice and left the coded messages. When Sheehan didn't call back "she called 911... she thought he killed me," she said.

But when cops responded to the house, they found Raymond Sheehan, 49, dead on the bathroom floor - not Barbara.

The unassuming public school secretary was marched out in handcuffs and the murder became more shocking because of the secret it exposed.

Raymond Sheehan's colleagues portrayed him as a nice guy.