The heart that Melissa had spinning on her page

Previous post:
[NY] DEATH OF UNMENTIONED OFFICER'S UNNAMED WIFE RULED SUICIDE AFTER 1 DAY INVESTIGATION - ...The Times Union is withholding the name of the victim as a matter of privacy. During the day Saturday - several investigators combed through the house at Floral Avenue before ruling the death a suicide...

One of the (many) things I appreciate about Myspace pages is that if you die, your friends can still stop by when they think of you and leave messages - on what would have been your birthday, in the middle of the night, whenever, for whatever reason. They stop by to remember you or miss you. Our Myspace page is so personal. We put our mark on it. Most often our hearts show - but at least our thoughts -what's happening in our lives or what's on our mind.

Having blogged so many deaths I have many links to many pages of those who have left us. But Melissa's page is gone:


"Invalid Friend ID.
This user has either cancelled their membership, or their account has been deleted."

Since everyone else's pages are still there - people who died years ago - I was surprised when someone left a message on the last post to say that Melissa's page was no longer there. Someone went through a process to have her page removed from Myspace? Is there some other explanation?

But I keep things.

I kept her page... screencaptured it while it was still there.

Melissa Varrone's last log-in date to her page was also the day she died - November 8th, 2008: 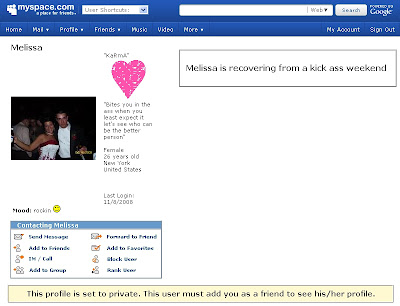 I enlarged the picture and dwelled on her final public Myspace words. I worked in Photoshop to see her better: 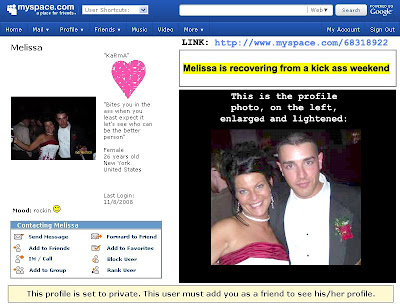 Melissa is recovering from a kick ass weekend

I'm not going to apologize for the following picture. I work on photos of victims to get a sense of who the world lost. I'm comtemplative. Here is the picture I did right after I first saw her page, again wondering if her words were simply spoken, or a trail of crumbs through the forest. 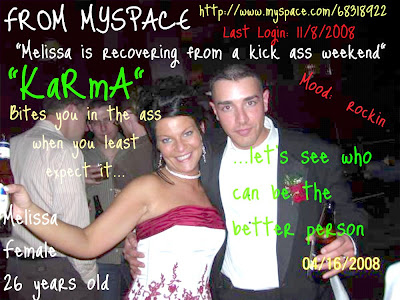 I'm not going to say anything more this morning than