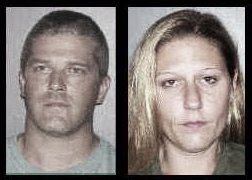 I'd comment, but I wasn't there. My thoughts then are as accurate or as backwards as anyone else's. A prayer is lifted for both of them.

Previous post:
[FL] Officer Suskevich arrested with wife after she shoots gun in the house, mad - ...Christine Suskevich told police she fired the round toward the back bedroom because she “just wanted to get (her husband’s) attention.” She said she did not intend to harm him or herself...

Police officer fired for conduct unbecoming
WBBH-TV
Wed., Jan. 7, 2009
CAPE CORAL: Cape Coral Police Chief Rob Petrovich fired Police Officer Curt Suskevich for "conduct unbecoming an officer" after an internal investigation stemming from a marijuana possession charge in Key West. Officer Suskevich and his wife were arrested on August 17, 2008. KEY WEST POLICE OFFICERS WERE CALLED TO THEIR VACATION HOME AFTER RECEIVING REPORTS OF A GUNSHOT. As the Key West police officers searched the home, they found marijuana in the house... "After reviewing all of the information gathered during the investigation, I concluded that Officer Suskevich’s employment with the Cape Coral Police Department should be terminated," said Chief Petrovich... "The circumstances and facts regarding the possession allegations still raised questions in my mind, which is why I did not concur with those charges," said Petrovich. "However, the statements Officer Suskevich made to Key West police clearly indicated that he was aware of his wife’s marijuana use and took no affirmative action to address the illegal activity. This is unacceptable behavior for a police officer"... [Read the full article here - and I have a saved copy if it becomes unavailable]
on 1/07/2009