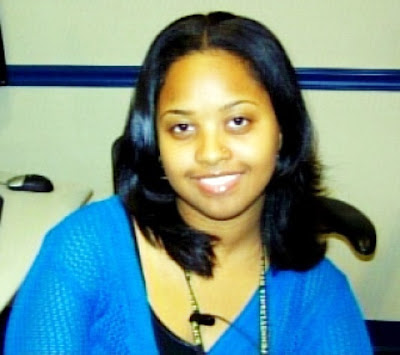 ..."She felt the relationship wasn't what she wanted it to be and wanted to come back home," said Jackson's uncle, Lt. Shelton Sneed, a state-police station commander in Avondale. He said that her older co-workers "looked at her as a daughter"...

Girl Hiding in Closet Heard Sister Die
NBCPhiladelphia.com
By Deanna Durante
MSNBC - Dec 31, 2008
Sun., Jan. 4, 2009
[Excerpts] There was a vicious murder in Delaware County. A man broke into a home, chased his former girlfriend up the stairs and stabbed her to death, police said. It all happened while the victim's little sister hid in a closet, listening to the struggle. "She was an excellent dispatcher, excellent employee. She will be sorely missed," Pennsylvania State Police Trooper Danea Alston said... Tuesday night at around six, 20-year-old Amber Jackson returned home to find her estranged boyfriend, 22-year-old Frederick Cleaveland, waiting for her... The two were high school sweethearts and on Sunday, Jackson moved out of the apartment the two shared, police shared. Jackson was a college student and state police dispatcher. Her death has stunned the troopers she worked with and family she has left behind. [Full article here] 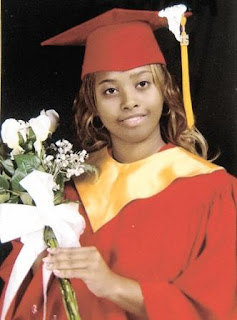 U. Darby cops guard suspect in 'slaughter'
Philadelphia Daily News, PA
By WILLIAM BENDER benderw@phillynews.com 215-854-5255
Fri, Jan. 2, 2009
Amber Jackson couldn't possibly have known. She couldn't have known that when she was dancing with Freddie Cleveland at her senior prom three years ago, she had her arms wrapped around her killer. "She was butchered, she was slaughtered," Upper Darby Police Superintendent Michael Chitwood Sr. said of Jackson's death, a homicide so brutal that it stunned hardened police veterans. Yesterday, Cleveland was under police guard at the Hospital of the University of Pennsylvania, charged with killing the 20-year-old state-police dispatcher in her parents' bathroom Tuesday night... Chitwood said that Jackson had been stabbed so many times that crime-scene investigators "stopped counting at 30... Significant stab wounds about her head, face, neck... And when I say significant, I mean really, really bad. You could see the anger that he had toward her - the hatred, probably... To do that to another human being, I don't think there's a word to describe it." Jackson, a police-radio dispatcher in Norristown, graduated from Mercy Vocational in 2006 and was expected to graduate shortly from Delaware County Community College with an associate's degree in business administration... "She felt the relationship wasn't what she wanted it to be and wanted to come back home," said Jackson's uncle, Lt. Shelton Sneed, a state-police station commander in Avondale. He said that her older co-workers "looked at her as a daughter." Jackson was talking with a friend on her cell phone Tuesday night when Cleveland confronted her outside her parents' Drexel Hill home. Chitwood said that the friend on the other line heard Cleveland say, "Please tell me it's not over. Just come out and hug me. Just one more hug," before the phone cut out. Jackson locked the door and told her 13-year-old sister to hide, and to call police and their father. She did, but neither arrived in time. Cleveland broke through the plate-glass front door and grabbed a kitchen knife, police said. "The 13-year-old hears noises, doors slamming," Chitwood said of Jackson's sister, who hid in a closet. "She heard her sister, Amber, telling Frederick Cleveland, 'Please don't hurt my sister!'" -- "'Daddy, daddy, come home! Amber's being hurt!' " the younger sister said into the phone, according to the police report. Police found Jackson in a pool of blood in the upstairs bathroom. Two of her fingers were partially severed, in what appeared to be defensive wounds... [Full article here] 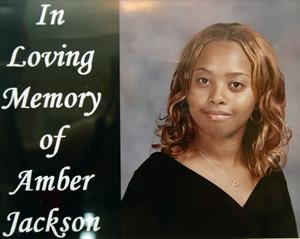 FAMILY’S SORROW RUNS DEEP FOR MURDERED U.D. WOMAN
Times Correspondent
By Linda Reilly
Thursday, March 26, 2009
[Excerpts] Family members of Amber Nicole Jackson, a Drexel Hill woman allegedly slain by her ex-boyfriend, sobbed quietly while waiting for the preliminary hearing for the accused to get under way Wednesday. Clutching onto each other or holding hands, the 19 relatives — grandparents, parents, sister, aunts, uncles, cousins and friends — waited in the police station courtroom in anticipation of having to see the man who allegedly took Jackson’s life. They all wore either photographs of the young woman on lanyards or T-shirts emblazoned with her beautiful smiling face and her name, date of birth and death and the words: “We will always love and remember our girl.” - “We came to show our support for Amber, who couldn’t be here today,” said Pennsylvania State Trooper Shelton Sneed, the victim’s uncle. “We came to represent her for our family and to let the other family know she won’t be forgotten. We wanted to put a face to Amber”... [Frederick “Freddie” Cleveland] was escorted into the courtroom in leg chains and handcuffs for the brief proceeding before Magisterial District Judge Ann Berardocco... Jackson and Cleveland had known each other since junior high and had an on-and-off relationship. They had lived together briefly in the Drexelbrook Apartments and broke up Dec. 28 when Jackson moved back into her parents’ home... An ambitious woman, Jackson graduated from Mercy Vocational Catholic School in Philadelphia and was a licensed cosmetologist and part-time Delaware County Community College student scheduled to graduate in June with an associate degree in business. She was employed as a Pennsylvania State Police dispatcher in Norristown.... Cleveland, employed with the Lansdowne Borough Sanitation Department, was ordered held for trial on all charges. He will be arraigned April 23 in the county courthouse for criminal homicide, first-, second- and third-degree murder, possessing instruments of crime, aggravated assault, reckless endangerment, terroristic threats and criminal trespass... [Full article here]

EX-BOYFRIEND GUILTY IN MURDER OF UPPER DARBY WOMAN
Delco Times
By Marlene Digiacomo
Saturday, March 27, 2010
[Excerpts] With a picture bearing the smiling face of Amber Jackson reflected on a screen behind him, a prosecutor Friday charged there was no phantom assailant — as the defense claimed — and that the more than 30 slashing and stabbing wounds were inflicted by her ex-boyfriend... A jury later found Cleveland, 23, of the first block of Plumstead Avenue, Lansdowne, guilty of all charges in Jackson’s Dec. 30, 2008 stabbing death. As the verdict was announced in the packed courtroom, there was silence. But as the defendant’s family was being ushered out, emotions erupted and there was some kind of outburst that brought sheriff’s deputies and courthouse police converging at the front of the courthouse. The victim’s family was ushered out through another corridor. Amber Jackson’s parents, Wayne and Michelle Jackson, kept their composure. “Justice was served,” said the mother. “But at the end of the day our daughter is never coming home.” First-degree murder carries a mandatory sentence of life in prison... The jury of six men and six women deliberated 90 minutes. The panel rejected the defense’s contention that some mysterious third party also broke into the house, stabbed Cleveland once and then repeatedly and savagely stabbed Jackson. [Assistant District Attorney Michael] Dugan had presented testimony during the four-day trial that Cleveland’s wound was self-inflicted — part of a murder and attempted suicide... Key testimony against the defendant was given by Upper Darby Detective Capt. George Rhoades, who said Cleveland admitted the killing when he was questioned at the hospital a day later... [Full article here]

'LOVE IS NOT ABUSE': Jackson family continues to fight domestic abuse more than a year after their daughter's death
Delco Times
By Marlene Digiacomo
Monday, June 7, 2010
[Excerpts] Michelle Jackson smiled as she remembered how protective and motherly her daughter Amber was about her younger sister... "Amber had that protective instinct," said their father, Wayne Jackson, as he related that Amber's last words were for her teenage sister's safety... April, now 15, showed her own strength of character and love for Amber when she stoically took the stand in March and testified about what she saw and heard that horrific day almost two years ago... For Michelle and Wayne Jackson, it's too late to help their daughter. "If we can save somebody else, then that's the main thing," said the mother. The parents are hoping that others will learn from their tragedy and free themselves from an abusive and controlling partner before it's too late. And they are seeking to have young people talk to their parents or another adult for help, rather than just confide in friends... The parents said there was nothing in her daughter's relationship that would have sent up a red flag as to the brutality that would eventually claim Amber's life... Wayne Jackson said he was on his way to work when he received the terrifying call from April indicating "Amber was being hurt" "I slammed on the brakes and spun the car around"... Wayne ran upstairs and saw the bathroom door was partially open. When he pushed it and saw Amber's body on the floor, he collapsed to his knees... The mother said Amber was bubbly, had an infectious smile and "the whole house lit up when she came home"... Her killing shattered their lives. Michelle said their faith and their daughter April is what has sustained them. Following the sentencing, about 50 supporters and family members joined hands and prayed together outside the courtroom. During the sentencing, Judge Patricia Jenkins noted that Cleveland showed no emotion concerning Amber's death, while others who never knew her were obviously impacted by what happened to her... [Full article here]
on 1/05/2009