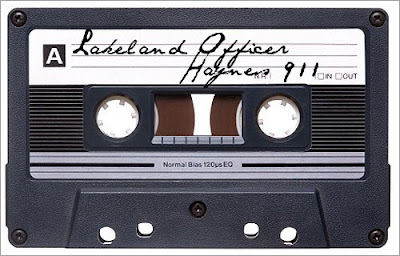 ...[Lakeland Police Officer Rawn] Haynes was uncooperative at the scene of the shooting, refusing to give a statement or explain what had happened, according to the sheriff's office incident report... The Orange County Sheriff's Office said Haynes has not cooperated with its investigators... Haynes refuses to give a statement to Orlando sheriff's investigators... He has hired Orlando attorney Rhiannon Arnold, who said Tuesday she advised Haynes not to speak with authorities... Orange County Sheriff's Office officials said Haynes' attorney has said no answers will be forthcoming from his client... When a police officer is involved in a gun accident and he refuses to cooperate with the investigating agency, it's time for him to pursue another career path...

BOY SHOOTS HIS BROTHER IN HAND WITH OFFICER'S GUN
BayNews9
September 17, 2010 5:15 PM
[Excerpts] An off-duty Lakeland police officer was involved in an accidental shooting that occurred in Orlando... Deputies said they arrived to find a boy with a gunshot wound in his hand... with an injury described as not life-threatening. According to the report, the officer, who is also a football coach, left the 10-year-old and his seven-year-old brother in his car while he ran inside to get a third child to take to practice. Investigators said while the officer, ran inside the seven-year-old boy somehow got the officer's gun and shot his brother in the hand. The boys told investigators that they found the gun in the officer's bag... Lakeland police say they will not release the officer's name because he is protected by law as an undercover officer. The report lists the nature of the call as a felony, but both the Orange County Sheriff's Office and the State Attorney's Office will not say if any charges will be filed... [Full article here]

RECKLESS LAKELAND COP ID’ED
West Orlando News
9/21/2010
[Excerpts] The off-duty Lakeland police officer, who left two young boys and his firearm in his vehicle, which led to an accidental shooting of a 10-year-old boy in the hand, has been identified. He is Officer Rawn Haynes... Randolph Haynes, father of Officer Rwan Haynes told police that he was standing on the porch at his home, when he heard a gunshot come from his son’s vehicle. He said he opened the door of the car and both children came out with one holding his bleeding hand, with the other child saying he was sorry... [Full article here]

NEW INFORMATION ON A SHOOTING WITH AN LPD OFFICER'S GUN
BayNews9
By Rick Elmhorst, Anchor/Reporter
September 21, 2010
[Excerpts] ...LPD said it can't comment about its review of the incident and that it will be up to officials in Orange County whether any charges will be filed. LPD said officer Haynes is taking some personal time office in the wake of the incident. [Full article here]

CHILD WHO SHOT BROTHER FOUND LAKELAND COP'S GUN IN BAG
911 call released
Orlando Sentinel
By Anika Myers Palm
September 21, 2010
[Excerpts] ...[Lakeland Police Officer Rawn] Haynes was uncooperative at the scene of the shooting, refusing to give a statement or explain what had happened, according to the sheriff's office incident report. In a recording released on Tuesday of the 911 call Haynes made immediately after the shooting, Haynes repeatedly calls the shooting an accident, but initially gives few details about the circumstances that led to it. At the beginning of the call, Haynes tells the operator, "I have a kid that just suffered a gunshot wound to his hand." Asked if it was an accident, he says it was. When asked again what had happened, Haynes repeats, "A kid suffered a gunshot wound to his hand." It wasn't until the 911 operator asked if someone had shot the boy that Haynes went into specific detail. "His little brother," Haynes says in the recording. "It was with my handgun. I left it in the car. I didn't realize that it was in the bag"... [Full article here]

LAKELAND OFFICER BACK AT TO WORK AFTER SHOOTING INCIDENT WITH ORLANDO BOY
The Ledger
September 28, 2010
[Excerpts] A Lakeland police officer involved in an accidental shooting that injured an Orlando boy returned to work Monday but has been reassigned. Rawn Haynes, 46, is working desk duty in the department's special investigation section, LPD said. Before Monday, Haynes had been assigned to the section's street-crimes unit as a uniformed officer... The incident is under an internal review at the Lakeland Police Department. The Orange County Sheriff's Office said Haynes has not cooperated with its investigators. He has hired Orlando attorney Rhiannon Arnold, who said Tuesday she advised Haynes not to speak with authorities. Arnold said the Orange County Sheriff's Office has turned the case over to the Orange County State Attorney's Office. [Full article here]

LPD IN ORANGE COUNTY SHOOTING: CAN THE LAW REJECT THE LAW?
The Ledger
September 29, 2010
[Excerpts] When a police officer is involved in a gun accident and he refuses to cooperate with the investigating agency, it's time for him to pursue another career path. That's the decision Lakeland Police Department Officer Rawn Haynes faces following a near-tragedy two weeks ago in Orlando. Haynes was off duty and left two young boys in his LPD car. His loaded LPD-issued handgun was in the car. One of the boys found it and shot the other boy - his brother - in the hand. Thankfully, the injury is not life-threatening. Shockingly, though, Haynes refuses to give a statement to Orlando sheriff's investigators. Orange County LPD is conducting its own administrative review of the incident. Among several questions is why Haynes was using his LPD-issued 2005 Ford Crown Victoria off-duty and well outside the Lakeland area where the shooting occurred... Nonetheless, if he continues to resist cooperating with the Orlando investigators, Chief Boatner should expedite the LPD's review and tell Haynes to find a new job... [Full article here]