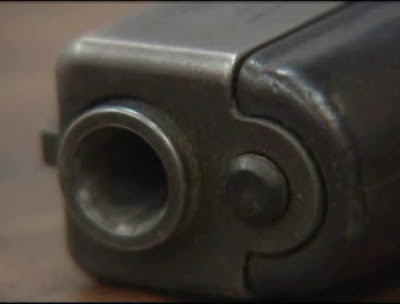 "...it's an accidental shooting, that's it."
TROOPER'S SON, 4, ACCIDENTALLY SHOOTS SELF WITH DAD'S GUN
WPXI
October 15, 2010
Channel 11 News learned Friday that the 4-year-old son of a Belle Vernon Pennsylvania State Trooper accidentally shot himself in the leg with his father's gun Thursday night. According to Donora police, Trooper Nicholas Petrosky was drying his son after a shower when the little boy grabbed his father’s gun, which had been placed on the bathroom counter.... The family put a block on information from the hospital and the child's condition was not immediately known... [Full article here]

STATE TROOPER'S SON, 4, SHOOTS HIMSELF
Pittsburgh Post-Gazette
By Jonathan D. Silver
Friday, October 15, 2010
Donora police are investigating a shooting incident Thursday night in which the young son of a state trooper apparently shot and wounded himself by accident at the family home... "It's being investigated by the Donora Police Department, and we are not involved in the investigation in any way," said Lt. Harry Keffer, commander of the state police's Belle Vernon barracks. "We've been informed by the Donora Police Department that it's an accidental shooting, that's it." Lt. Keffer identified the trooper as Nicholas Petrosky... An officer who answered the phone at the Donora Police Department said the chief was not in and refused to divulge any information.... [Full article here]

TROOPER'S SON SHOOTS HIMSELF BY ACCIDENT: 4-year-old wounded using father's gun in Donora home
Pittsburgh Post-Gazette
By Jonathan D. Silver
Saturday, October 16, 2010
The 4-year-old son of a state trooper at the Belle Vernon barracks apparently wounded himself by accident Thursday with his father's personal gun at the family home in Donora. Donora police refused to release information about the investigation, and it was unclear what steps Trooper Nicholas Petrosky took to secure the gun at his residence or how the child got the weapon. State police spokeswoman Lt. Myra Taylor said the investigation is in the hands of Donora authorities and that her department will eventually discuss the situation with investigators to assess whether any follow-up with the trooper is required... [Full article here]