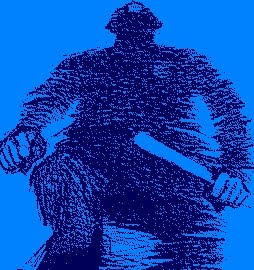 IT DOES NOT MATTER HOW MANY WORDS THE PROSECUTOR DOES OR DOESN'T USE, THIS WAS DOMESTIC VIOLENCE. ONE OF HEADS HE BANGED WAS THAT OF HIS POLICE OFFICER EX-GIRLFRIEND. AND IF ASSAULT OF FEMALE OFFICERS CAN BE ADDRESSED WITH SUCH A CASUAL LEGAL RESPONSE, WHAT CHANCE DOES A NON-COP DOMESTIC VIOLENCE VICTIM HAVE? IT'S DEPRESSING AND DISCOURAGING.

...Before leaving the bar, Miller reportedly approached his ex, and the other officer, and asked them, "Why the fuck are you in my neighborhood?" Then he grabbed the two women by their necks and slammed their heads together... Miller denied slamming their heads together -- even though there were witnesses saying he had... Miller's been charged with three counts of assault and two counts of disorderly conduct...

MESA OFFICER
RECEIVES PROBATION
IN SCOTTSDALE BAR ASSAULT
Arizona Republic
by Nathan Gonzalez
Dec. 21, 2010
[Excerpts] A 15-year Mesa police veteran was sentenced to one-year of probation after admitting to assaulting two women inside a Scottsdale bar. On Dec. 9, Steven Miller accepted a plea agreement in Scottsdale Municipal Court where he pleaded guilty to one misdemeanor count each of assault and disorderly conduct, said Scottsdale City Prosecutor Caron Close. Miller was placed on one year of unsupervised probation and ordered to pay $646 in restitution to his two victims. He must also complete anger management and alcohol-abuse programs... The victims, one of whom is an ex-girlfriend, told Scottsdale police that as Miller was getting ready to leave, he approached them and slammed their heads together... [Full article here]

MESA COP CHARGED WITH ASSAULT AFTER SLAMMING TWO FEMALE OFFICERS' HEADS TOGETHER AT SCOTTSDALE BAR
Phoenix New Times
By James King
Mon., Oct. 18 2010 @ 9:27AM
[Excerpts] In our ongoing series about overzealous Valley cops with anger issues, a Mesa police officer has been charged with assault after allegedly slamming two female officers' heads together at a bar in Scottsdale. One of the female cops reportedly is one of Officer Steven Miller's ex-girlfriends... The incident happened on September 12, at Flicka's, where Miller, a 15-year veteran of the department's organized crime division, had gone with his current girlfriend. According to court documents first obtained by the Arizona Republic, Miller and his girlfriend walked into Flicka's, where they saw Miller's ex-girlfriend and another woman, both off-duty Mesa officers. Miller and the female officer broke up about a year ago, and the breakup had not gone well, she told police. When Miller's current girlfriend went to the bathroom, Miller approached the victims. He asked his ex, who had just had surgery, how she was doing. She said fine and that was the extent of the conversation... the current girlfriend said she was uncomfortable and wanted to leave... Before leaving the bar, Miller reportedly approached his ex, and the other officer, and asked them, "Why the fuck are you in my neighborhood?" Then he grabbed the two women by their necks and slammed their heads together... Miller denied slamming their heads together -- even though there were witnesses saying he had... Miller's been charged with three counts of assault and two counts of disorderly conduct... [Full article here]

MESA OFFICER FACES CHARGES IN ASSAULT AT SCOTTSDALE BAR
The Arizona Republic
by Nathan Gonzalez
Oct. 17, 2010 09:20 PM
[Excerpts] A Mesa police officer faces charges related to domestic violence after he is accused of grabbing two fellow off-duty female police officers by the neck and slamming their heads together in a Scottsdale bar. Officer Steven Miller, a 15-year police veteran assigned to Mesa's Organized Crime Section, declined to comment about the case... Scottsdale City Prosecutor Caron Close said the charges are misdemeanors, but some are related to domestic violence because one of the women he's accused of assaulting is his ex-girlfriend... Miller's ex-girlfriend and another woman, both off-duty Mesa officers, were in the bar when Miller came in with his current girlfriend. Police said Miller's ex-girlfriend told them that "she and Steve separated about a year ago and he did not take it well." When Miller's current girlfriend went to the restroom, police said, Miller walked over to speak with the ex-girlfriend, who had undergone surgery a month earlier to implant a pacemaker... Minutes later, the girlfriend returned from the restroom and joined Miller at the bar. After about 30 minutes, she stated "she felt uncomfortable given the situation and decided it was best to leave Flicka's," which is a regular hangout for Miller. The victims told police that's when Miller approached them, grabbed them from behind the neck and said, "Why the (expletive) are you in my neighborhood?" the report states. He then slammed their heads together. The ex-girlfriend "was feeling a substantial amount of pain in her neck from Steve grabbing her as well as discomfort in her chest," the report states. "She could tell Steve had been drinking alcohol at the time of the assault." Miller denied assaulting the women, although it was witnessed by others in the bar, the report states... [Full article here]