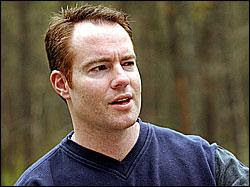 ...When their son-in-law was charged with murder, the Clarks fought for and gained temporary custody of the children in an emotional Family Court battle. Because the marriage was turbulent, according to friends of Ellen at the time of her death and family records, the Clarks believed Andros killed their daughter... "I'm not a saint," Andros said as he was leaving an interview. "But I'm no murderer"... His father, Atlantic City Police Capt. James Andros II, said he knew his son was innocent all along because he was with him at the Beach Bar in Brigantine the night Ellen Clark Andros died...

Cleared of wife killing, he takes comfort in family
Press of Atlantic City, NJ - May 6, 2007
By MADELAINE VITALE MVitale@pressofac.com
Published: Sunday, May 6, 2007

As he walked up the aisle at St. Peters funeral home in Pennsauken to pay his last respects to his dead wife, James Andros heard people saying to him, "Murderer, murderer, murderer."

It had been only a few days since Andros arrived home to find his wife slumped over a computer keyboard. Ellen Andros just 31 when she died March 31, 2001. Andros was left to raise two young girls alone. Worse yet, he was left to face a world that assumed he was a killer.

She suffered a horrible death, and it should never have happened, the priest would say at the funeral.

Investigators thought the same. They accused Andros of coming home after a night of drinking and then smothering his wife. He was charged with murder 23 days later.

Andros, a 22-year veteran of the Atlantic City Police Depart-ment, received $2.3 million last month in a lawsuit settlement with Atlantic County for malicious prosecution and defamation.

Twenty months after the murder charge was filed, the case took a turn. Forensic slides from an outside defense expert showed the petite blonde died from a heart ailment. The Atlantic County Prosecutor's Office exonerated Andros in December 2002.

Andros proceeded to file suit against the county and the Prosecutor's Office, and the county was liable because Dr. Elliot Gross, the medical examiner who performed the autopsy on Ellen Andros, erroneously listed the cause of death as a homicide.

Andros, who calls his deceased wife his first love, remains bitter about the murder charge. To this day, he knows, some people think he is a killer.

"It's always in the back of my mind," Andros, 38, said during a recent interview. "I get a weird feeling. There is really no way to tell. I guess it will always be there."

Andros is desparately trying to reclaim a life forever altered by one fateful night.

Andros was at a Brigantine bar the night his wife died. He liked to go out with friends and family, and often when he did, Ellen would take the couple's two children — Meghan, 11, and Elizabeth, 9 — to her parents' home in Pennsauken.

He said he pulled up to their rancher in Pleasantville in the early morning, saw lights on in the house and figured that his wife had come home early. He said he yelled to her and heard no response.

He walked into the study. Ellen was slumped over the computer. When he touched her, he saw her face was purple. It was an image that would stay with him for life.

He tried to revive her and called 911. But his wife was dead, and investigators were immediately suspicious.

Within a month, he was behind bars. On April 23, 2001, Andros joined the rest of the crime suspects in a cell at the Atlantic County jail.

He was on suicide watch in solitary confinement. The lights glared. It was impossible to sleep. Every 15 minutes an officer came to check on him. For 13 days until he made bail, a man who was used to making the arrests was on the other side of the bars.

He thought of his children. They had lost their mother and now they might lose their father.

Ellen and James Andros first met as children in Merchantville, where Ellen lived and James spent a lot of time visiting relatives. As teenagers, they shared a first kiss.

"She was always a part of my life. I have no problem saying this: She was beautiful, smart, opinionated — a perfect girl. I still consider myself blessed to have known her and the children she gave me, even though now there is so much hurt."

Their wedding was like something out of a movie. They married at Seaview Marriott Resort & Spa in Galloway Township in November 1994. Their song was "In Your Eyes" by Peter Gabriel.

"I thought I had realized my dream," Andros said.

When their son-in-law was charged with murder, the Clarks fought for and gained temporary custody of the children in an emotional Family Court battle. Because the marriage was turbulent, according to friends of Ellen at the time of her death and family records, the Clarks believed Andros killed their daughter.

"Generally speaking, if people see it and they think it is true that I am a bad man or have trouble with children, they say I am an alcoholic," Andros said. "I am not an alcoholic."

Years after the vicious fight for custody of the children and the exoneration of their son-in-law, the Clarks and Andros have come to a workable situation in which the grandparents can be a part of the children's lives, Andros said.

"I'm proud of them after what we all went through," Andros said of the Clarks. "After they lost custody, I invited them down to come to therapy. They see the girls all of the major holidays, every other weekend and one week of the summer."

Andros takes care of the girls with the help of his sisters, mainly Marie Kokes.

"I don't know what I would do without her," Andros said of his sister's constant support.

The girls seem to have adapted to the different type of schooling. Since they completed therapy only eight months ago, Andros said they still suffer from anxiety and separation issues.

Andros was on leave from the force until 2004, but went right back on the midnight-to-8 shift. This time, his lifelong friend Christopher Barber, 35, also a police officer, is his partner. Barber, a father of three, wanted the late shift for the same reason as Andros. He wants to be home with the children as much as possible, Barber said Friday.

"There was a never a doubt in my mind about Jimmy," Barber said. "If he could get on with life then he would do well."

Andros comes home from work at about 8:30 a.m. every day. Then he gives the girls their school lessons for the day.

Then he looks over the children's homework. They have dinner and he goes off to work.

The special days with the children are on the weekends.

"We go to church and then we will have dinner together ... as a family," Andros said. "Either we will cook out on the grill — burgers — or have something inside."

Despite the $2.3 million settlement, Andros says he is no millionaire.

"I'm not out of debt after this," he said of the massive bills for legal fees in criminal, family and civil courts.

"My lawyer said there will be a structured settlement and the goal is that there will be money left for my children," Andros said.

It is evident he is bitter when he speaks of the Prosecutor's Office. A Federal Court judge in Camden dismissed the defamation and false arrest lawsuit against Atlantic County Prosecutor Jeffrey S. Blitz and the investigators who worked on the case.

His attorney, Kevin Kent, plans to appeal the judge's ruling.

The federal court judge found probable cause to dismiss the claims Andros brought against the prosecutors and the investigators. The judge found that evidence collected by the Prosecutor's Office could reasonably lead to a murder charge against Andros.

"I'm not a saint," Andros said as he was leaving an interview. "But I'm no murderer."

EXCERPTS FROM PAST NEWS:
[AFTER READING 31 ARTICLES] ...While Jim’s supporters portray him as a loving and devoted police officer and family man — who in fact had just returned two days before his wife’s death from a week of skiing with her and their kids in Vermont — Ellen’s friends and family offer an image of a relationship, and a husband, on the edge. In sworn statements, they tell investigators that Ellen’s six-and-a-half-year marriage was in tatters, that Jim drank excessively, that he’d been violent, that Ellen suspected he’d been unfaithful. Jim had for some time been sleeping in a separate bedroom, no longer welcome in Ellen’s bed. Ellen and the girls had left before. At the time of her death, her friends say, she was planning to leave again... His father, Atlantic City Police Capt. James Andros II, said he knew his son was innocent all along because he was with him at the Beach Bar in Brigantine the night Ellen Clark Andros died...
on 5/06/2007