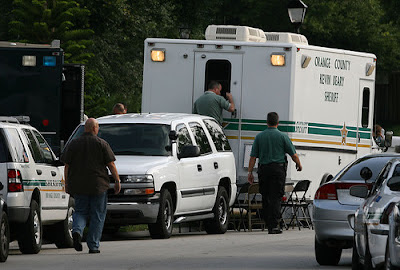 Standoff ends when former deputy kills self
The Orlando Sentinel
Monday, May 07, 2007
A retired New York deputy killed himself this morning after police placed an entire west Orange County neighborhood under a four-hour lockdown. The stand off between Michael Zuzio, 56, SWAT team members and Orange County Sheriff's Office deputies ended when Zuzio shot himself... Zuzio, a former deputy with the Nassau County Sheriff's Office in Long Island, N.Y., broke into Julie Bender's house at 162 Westmoor Bend shortly before 5 a.m. He pointed a gun at her chest and threatened to kill himself, deputies said. Bender, 48, is Zuzio's ex-girlfriend. Deputies, SWAT team members and hostage negotiators arrived at the scene after the break-in set off an alarm. Zuzio then released Bender and barricaded himself inside her home.

Rash of deaths sheds light on domestic abuse
Advocates urge battered women to use caution and seek support.
Orlando Sentinel
Sarah Langbein | Sentinel Staff Writer
Posted May 8, 2007
...Monday morning, Julie Bender awoke to her ex-boyfriend forcing his way into her home on Westmoor Bend and activated a silent alarm. When law-enforcement authorities called to check on her, she said that Michael Zuzio, 56, was pointing a gun at her and threatening to kill himself, according to reports. Zuzio, a retiree from the Nassau County Police Department in New York, let Bender go unharmed 20 minutes later. He barricaded himself inside the home as Orange County authorities evacuated adjacent homes. With SWAT-team members surrounding the house, Zuzio told a negotiator that he would come out at 8 a.m. When that time rolled around, Zuzio told negotiators he was going to kill himself. He hung up the phone, and one shot could be heard from inside the home...
on 5/07/2007