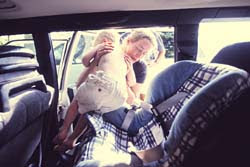 NYPD DAILY BLOTTER
New York Post, NY - 2 hours ago
By TATIANA DELIGIANNAKIS
May 13, 2007
QUEENS - An off-duty cop was arrested for endangering the welfare of a child and harassment in Elmhurst, authorities said yesterday. Anthony Mahepath, 36, was dropping off his 2-year-old daughter at her mother's workplace Friday evening.
The woman works as a police officer based out of an NYPD medical division...
The woman, who was not identified, stepped out to pick up the toddler, who was strapped in the back seat of the car... The woman then reached into the car to take the baby and Mahepath allegedly tried driving away, sources said. No one was injured but cops were called and Mahepath was later arrested and suspended.

NYPD officer arrested in domestic affair
amNewYork, New York
By ERIK GERMAN, Newsday Staff Writer
erik.german@newsday.com
May 13, 2007
...Mahepath tried pulling away. Mahepath was arrested, charged with harassment and reckless endangerment and suspended from the force. Police described the dispute as "domestic in nature" and no one was hurt.
This is the second domestic confrontation leading to criminal charges against an off-duty New York City police officer this week.
On Thursday night, police said that Transit Officer Harry Rupnarine, 38, fired his 9-mm service pistol, killing his girlfriend, 22, with a single shot to her head during a argument on Atlantic Avenue near 82nd Street in Woodhaven. He is being held without bail on charges of second-degree murder.
on 5/13/2007