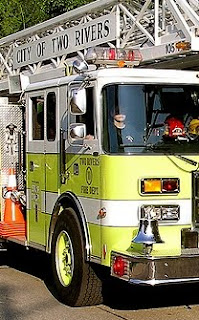 Two Rivers firefighter arrested for domestic violence
Herald Times
February 27, 2010
[Excerpts] MANITOWOC - Zachary Peterson, 33, an employee of the Two Rivers Fire Department, was arrested Feb. 11 for domestic violence-related disorderly conduct, according to a Manitowoc County Sheriff's Department report received by the Herald Times Reporter on Friday afternoon... The Two Rivers Police Department responded to a call... The Manitowoc County Sheriff's Department took over when Two Rivers police realized the individual in question works for the fire department. Peterson allegedly grabbed a 31-year-old woman by her arms, pulled her across a bed and refused to let her go after hearing her talking on a cell phone. She refused to give Peterson the phone or tell him to whom she was talking. Peterson told an officer he let go when the woman kicked him in the stomach. An officer on the scene observed scratch marks and irritated skin on her arms and a red mark on the side of her neck... Peterson was taken to jail, and the Domestic Violence Center was contacted. According to Manitowoc County Circuit Court records, the Manitowoc County Sheriff's Department served a temporary restraining order on Peterson on Feb. 12. [Full article here]
[city personnel involved domestic violence oidv intimate partner violence (IPV) abuse emt public safety wisconsin state]
on 2/27/2010