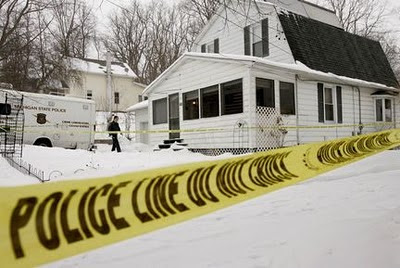 Ionia shooting victims continue to recover
MLive
By Peg McNichol
February 27, 2010, 4:48PM
[Excerpt] Medical conditions for Wendy Cunningham and her son, Joshua Snyder, have been upgraded to fair. Cunningham, 42, and Snyder, 16, are recovering at Spectrum Health Butterworth Hospital after being shot during an apparent domestic dispute. Cunningham's husband, former state police trooper Bart Cunningham, 37, had shot them multiple times and took his own life in the Friday morning incident...

Two Shot in Ionia Home
WLNS
Feb 26, 2010
[Excerpts] ...Police say he shot his wife and sixteen year old stepson multiple times before killing himself. They say an argument occurred before the shootings. After that, the couple's thirteen year old daughter called 911.
The police chief says this isn't the first time they've been called to Cunningham's hom... This time he says it took the swat team fifty minutes to get inside the home with the help of the thirteen year old. David Bulling, Ionia Police Chief: "We were communicating with a thirteen year old on the phone to determine what the situation was and getting our team ready and deployed to go in and make an entry of the home, not knowing what the status of the shooter was"...

Suspected gunman dies after Ionia shooting, two others seriously injured
By Dave Odette The Grand Rapids Press
February 26, 2010, 9:01AM
[Excerpts] ...A 13-year-old girl, who was not hurt, called 911, and stayed on with the dispatchers throughout the ordeal. "She was able to give us updates as this progressed, and she was very helpful," Ionia Public Safety Director David Bulling said... A critical-response team, comprised of Ionia police and Ionia County sheriff's deputies, responded to the scene, but police did not fire any shots, Bulling said.

To see more collected news on this shooting, go to Renee's blog: