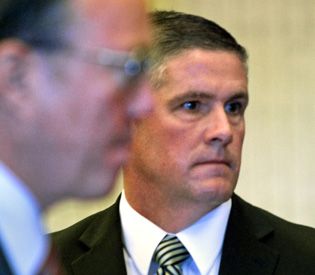 ...On Nov. 18, Saugus police responded to a woman’s home for an alarm sounding and reports of an argument. Police arrived to find the woman standing in the garage and McCarthy, in an unmarked Ford Crown Victoria police cruiser, driving away...


FROM UPDATE BELOW:
A veteran state trooper avoided a drunken-driving charge in court today despite claims by Saugus police that he smelled of booze and had an open beer bottle in his car... “The court issued what it saw fit, but we certainly have our opinion on the facts of that evening,” said state police spokesman David Procopio... McCarthy is due back in court March 9...

PREVIOUS POST:
[MA] Lawbreaking State Police Cpt. McCarthy gets to call the shots. - Massachusetts State Police /Trooper Cpt. Thomas "Tom" McCarthy - the evening shift commander for Troop C based in Holden - is charged only with failing to stop and failing to stay right of center. Amazing, but not surprising... The officer smells liquor, sees two unopened cans of beer, an empty can in the backseat, as well as McCarthy's service weapon - but can't get McCarthy to agree to turn off and step out of the vehicle.

TROOPER ACCUSED IN CHASE IN COURT: Officer reported smelling alcohol on his breath
FOX 25 / MyFoxBoston.com
Updated: Thursday, 29 Dec 2011
Published : Wednesday, 28 Dec 2011
[Excerpts] A Massachusetts State Police captain who was arrested in November after allegedly leading local police on a chase appeared in court on Wednesday. Thomas McCarthy, 47, faces charges of failure to stop and a marked lane violation on Nov. 19. His attorney entered a guilty plea for those charges. The judge would not accept the plea because more charges could be filed against McCarthy... The veteran state police captain has been suspended without pay... Saugus police say they were called for complaints about an argument at McCarthy's girlfriend's home and saw him driving away in an unmarked cruiser... The officer reported smelling alcohol on his breath and saw opened and unopened beers in McCarthy's car. But the state police captain took off again down Route 1 and was eventually arrested... Another hearing is set for Jan. 19. [Full article here]

STATE POLICE CAPTAIN COULD FACE OUI CHARGES AFTER NOVEMBER ARREST
cbslocal.com
December 28, 2011
[Excerpts] Massachusetts State Police Captain Thomas McCarthy expected plead guilty to some minor motor vehicle charges on Wednesday, but instead he may face more serious charges in the future... According to court documents, McCarthy was spotted committing a marked lanes violation a short time later. An officer pulled McCarthy over and allegedly smelled alcohol on his breath. Instead of getting out of the car, McCarthy allegedly sped away. Several Saugus police officers chased him down Route 1... McCarthy was originally supposed to face a judge last month, but he never showed up in court. His attorney said McCarthy was at a treatment center in Florida. [Full article here]

JUDGE REJECTS GUILTY PLEA FROM STATE POLICE CAPTAIN FOR DRIVING VIOLATIONS; MORE CHARGES MAY BE FILED
Boston Globe
By Brian R. Ballou
12/28/2011 3:25 PM
[Excerpts] The arraignment of a Massachusetts State Police captain [Thomas McCarthy] cited last month for traffic offenses was postponed this morning at the request of prosecutors who are seeking additional charges against him, including operating under the influence of alcohol... Essex Assistant District Attorney Susan Dolhun told Judge Albert Conlon that additional charges may be filed after a clerk’s hearing on Jan. 19... [His lawyer Daniel] O’Malley had tendered a guilty plea, but Conlon didn’t accept it, and instead continued the case until the hearing. Failure to stop is a criminal offense, punishable by a $100 fine. The marked lanes violation is a civil offense that also carries a maximum $100 fine. McCarthy works out of Troop C in Central Massachusetts and serves as an evening shift commander. State police captains earn about $110,000 per year, plus overtime. On Nov. 18, Saugus police responded to a woman’s home for an alarm sounding and reports of an argument. Police arrived to find the woman standing in the garage and McCarthy, in an unmarked Ford Crown Victoria police cruiser, driving away... [Full article here]

COURT: NO DRUNK DRIVING CHARGE FOR STATIE CAPTAIN
Boston Herald
By Matt Stout
Thursday, January 19, 2012
[Excerpts] A veteran state trooper avoided a drunken-driving charge in court today despite claims by Saugus police that he smelled of booze and had an open beer bottle in his car during a chase down Route 1, but state police say he’s not off the hook with them yet. Clerk Magistrate Jane Stirgwolt struck down a potential OUI rap against state police Capt. Thomas McCarthy, 47, today during a closed hearing in Lynn District Court, but allowed prosecutors to add a negligent operation charge to counts of failing to stop for police and committing a marked-lanes violation stemming from his November arrest. Stirgwolt said there was “insufficient evidence” in charging McCarthy with drunken driving, confirming Saugus police didn’t have him take field sobriety or Breathalyzer tests. But state police said observations by Saugus cops and a state police commander, who reported McCarthy showed signs of intoxication when he met him at the police station that night, will still play into their internal investigation. “The court issued what it saw fit, but we certainly have our opinion on the facts of that evening,” said state police spokesman David Procopio... McCarthy entered a plea of not guilty during an arraignment on the new moving violation, and is due back in court March 9.... [Full article here]
[Tom police officer involved domestic violence oidv intimate partner violence ipv abuse law enforcement public safety professionalism accountability massachusetts state politics trooper]
on 12/30/2011