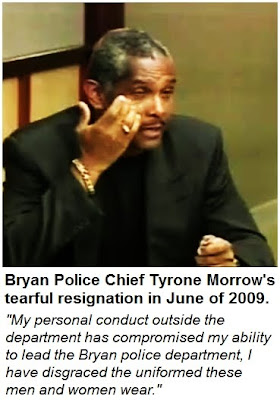 (WATCH THE FLIP-FLOP OF BRYAN CITY MANAGER DAVID WATKINS - WHAT HE SAID SIX MONTHS AGO IN CONTRAST TO WHAT HE SAYS NOW.)


MORROW TO LEAD FREEPORT POLICE
The Eagle
By Matthew Watkins
matthew.watkins@theeagle.com
January 28, 2010 12:13 AM
[Excerpts] Former Bryan police chief Ty Morrow will be the new head of the Freeport Police Department, The Eagle has learned. He is expected to be sworn in Monday, more than seven months after he stepped down from the top spot in the Bryan Police Department following a long investigation into a family violence call made to his home. Freeport City Manager Jeff Pynes said the decision to hire him came after a background check that included interviews with Bryan city officials, an employee of KBTX-TV and the foreman of the grand jury that declined to bring charges against Morrow in relation to the November 2008 incident at his home. In the end, Pynes said, city officials determined that the breadth of Morrow's career and his accomplishments put him on the top of the list of 27 people who applied for the job - even after considering the turmoil that led to his resignation from the Bryan department. "In life, people are stronger leaders after they ...," Pynes said, pausing. "Life throws curve balls at people. Everybody deserves a second chance"... He became the first black chief of the Bryan Police Department in June 2007 and was placed on paid administrative leave in November 2008 after police were called to his house. His wife, Cindy Morrow, told two sergeants that she had been abused, including once in February 2008 when her husband broke her nose and gave her two black eyes. She publicly recanted that statement, but filed for divorce months later, citing cruel treatment from her husband. No criminal charges were filed against Morrow, but he resigned following a seven-month investigation that concluded that he violated two of the department's general orders. In August, Morrow said that he left Bryan on his own accord... [Full article here]

FREEPORT'S MEDIA REPORTS THE HIRING OF MORROW IN A DIFFERENT LIFE (SORT OF LIKE THE NEW WIFE WOULD):

PYNES PICKS FREEPORT POLICE CHIEF CANDIDATE
The Facts
By Nathaniel Lukefahr
January 28, 2010
[Excerpts] City Manager Jeff Pynes said Wednesday he will recommend Tyrone Morrow as the city’s next police chief to City Council next week, which would give Freeport its first African-American top cop. Morrow, a 29-year law enforcement veteran and former Bryan police chief, has three college degrees, numerous citations and a Congressional Medal of Valor for law enforcement community service... Morrow resigned as Bryan police chief in June after allegations he was involved in a 2008 domestic disturbance with his now-former wife... A Texas Attorney General’s Office investigation and a Brazos County grand jury cleared Morrow of criminal wrongdoing. Pynes weighed Morrow’s history for about two months, talking to the foreman of the grand jury that declined to bring charges against him, a television station employee in College Station and Bryan officials. The candidate’s credentials and leadership abilities made him “too strong to pass up,” Pynes said. “He had this issue there,” Pynes said. “But if you balance that on his untarnished history as a law enforcement officer, in all realms of the ranks, everyone that we’ve talked to says he’s a leader, knows what integrity is and walks the walk”... Councilman Jim Phillips said he interviewed Morrow by teleconference and supports Pynes’ recommendation. “I looked at all of his credentials and they’re impeccable,” Phillips said. “He is well-recommended and well-prepared for this job. I was very impressed, and he has the potential to be an outstanding police chief.” The past allegations do not concern Phillips. “It was personal thing,” he said. Bryan City Manager David Watkins, who hired Morrow in 2007, hailed him as a great police chief. “I’m a reference for him, I’m a believer in him and I’m a supporter of him,” Watkins said. “Did he make a mistake? Yeah, he made a mistake. But we’ve all made mistakes. Does he deserve to be a chief somewhere? Yeah, he does. He’s an extremely hard worker and I can tell you that, if you want to unite the community with the police department, there’s nobody out there better... I had the purists on one side saying you can’t bring him back, but on the other I had a tremendous amount of local leaders, ministers and priests, business people and apartment owners calling and saying he had turned the department around.” Morrow told the Eagle in August that he was not forced to resign. He did so “based on the totality of what happened.” “My leadership abilities were compromised, and a leader needs to know when to step aside for the betterance of the community,” Morrow told the Eagle... “Education was very important, and he is well-educated,” Freeport Mayor Larry McDonald said... Pynes said Morrow is “a police chief who is overqualified for Freeport”... Pynes said he plans to seek council’s blessing to hire Morrow during closed session Monday, but the decision is his to make. After the meeting, Pynes hopes residents will meet Morrow and make their own decision about his character... Nathaniel Lukefahr covers Freeport for The Facts. Contact him at 979-237-0151. [Full article here]

BRYAN POLICE CHIEF TY MORROW RESIGNS
Bryan Police Chief Ty Morrow announced his resignation Monday afternoon at a press conference.
KBTX
Ashlea Sigman sigman@kbtx.com
Jun 15, 2009
[Excerpts] Ty Morrow is now the Bryan Police Department's former chief. Morrow publicly resigned Monday following results of an internal affairs investigation. Officers were called to the Morrows' home in November after Ty and Cindy Morrow had a fight. An outside investigator found that Ty Morrow's actions violated two department procedures, including conduct unbecoming an officer and his personal conduct. City Manager David Watkins said the findings would likely compromise Morrow's ability to carry out discipline within the department, and that he and Morrow did not discuss the chief continuing his employment at Bryan PD. During a press conference at the Bryan Justice Center, during which he gave a tearful farewell, Morrow said he emphasized one main idea when he became chief. "I stressed that this department would be held accountable," said Morrow. Morrow said accountability is now leading him to step down. "I believe I have dishonored the uniform that the men and women here wear, and based on that I have made the decision that I will resign my position as Chief of Police and retire from the Bryan Police Department," said Morrow."I want to apologize to all of the citizens of Bryan." Morrow also apologized to the Bryan Police Department and other state and local agencies asked to look into the November incident. "For all the staff hours that they had to waste on this investigation," said Morrow... Morrow was sworn in as chief Sept. 11, 2007. He had been on administrative leave since late November. [Full article here]

MORROW RESIGNS FROM BPD
ABC40
by John Cuoco
Posted: Jun 15, 2009 6:47 PM PDT
Another local leader is out of a job Monday, seven months after placing himself on administrative leave, Bryan Police Chief Tyrone Morrow resigned Monday afternoon. "I have made the decision to resign my post as police Chief of the Bryan police department," Morrow said... "My personal conduct outside the department has compromised my ability to lead the Bryan police department, I have disgraced the uniformed these men and women wear," Morrow added. Morrow was cleared of any criminal wrongdoing in the incident by the state attorney general back in March. Then, an internal investigation ensued. Bryan officials won't go into the details of that report, but Bryan City Manager David Watkins said Monday it would be impossible for Morrow to re-join the department. The best thing he could do for Ty Morrow, the community, the organization would be to retire walk out with your head high and be proud of what you did," Watkins said of Morrow today... Watkins also said Morrow would remain on the city's payroll until October 4, 2009 as part of a severance package. Aside from his emotional goodbye, the now-former chief left Monday's press conference without answering any questions... In the meantime interim police chief Peter Scheets will remain managing the department. [Full article here]

TY MORROW'S RESIGNATION IS BEST FOR BRYAN
Eagle Editorial Board
Published Tuesday, June 16, 2009 6:05 AM
[Excerpts] The decision for Bryan Police Chief Ty Morrow to resign was tough - on Morrow, on the department and on the people of Bryan. Unfortunately, it was the right decision, really the only decision to be made in this matter. Had Morrow been allowed to return to his position, he would have had no moral credibility to lead the department at a time it badly needs leadership... Had Morrow been almost anybody else, his personal difficulties that came to light last November could have been kept private. When the wife of the police chief reports spousal abuse, it naturally becomes public knowledge and public concern. While some of the allegations came in the midst of a contentious divorce, some were made by Morrow's wife prior to filing to end the marriage... Morrow was investigated by the Texas Attorney General's Office... Also, a firm hired by the city conducted an internal affairs investigation. By all accounts, Morrow was settling into his position nicely... Until his personal live became public... It became increasingly clear that Morrow could not return to the department as chief. We are sad to see him leave, but it is for the good of the department and the citizens of Bryan.I We wish him nothing but the best... [Full article here]
[police officer involved domestic violence oidv intimate partner violence (IPV) abuse law enforcement public safety texas state teflon cop hop gypsy cop recant ironic]
on 1/31/2010