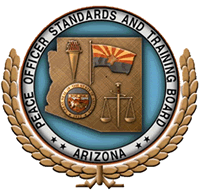 ...The AZPOST board, if it chooses to act on [Pima County Sheriff's Deputy David] Slocum's case, would be initiating action only to revoke his peace officer certification. A further hearing would be necessary to formally revoke his credentials...

Previous Post:
[AZ] Wife-abusing Deputy Slocum "resigned" just in time, but still certified to work as a cop in Arizona - ......Official reports show, [Pima County Sheriff's Deputy David] Slocum's wife announced she was moving out. Slocum grabbed his duty weapon and threatened to kill himself. "She was trying to use the telephone and call 911", said Lt. Deanna Coultas from the Pima County Sheriff's Department. "He slapped the phone out of her hand". According to reports, Slocum then dragged her down the hallway and locked himself in a room with a gun. She heard a shot, ran in and found Slocum uninjured... the Arizona Peace Officer's Standard's and Training Board out of Phoenix never revoked his certification...

A state certification board will meet this week to decide whether a twice-fired Pima County sheriff's deputy should lose his ability to be a peace officer in Arizona.

David A. Slocum, a nine-year veteran, was fired on March 9, five days after getting into a confrontation with a 12-year-old boy in a Pima County Juvenile Court holding cell, according to documents provided by the Arizona Police Officers Standards and Training Board.

A hearing on whether to start revocation proceedings is part of the AZPOST board's Wednesday meeting.

Slocum, 39, had previously been fired by the Sheriff's Department in November 2008 after getting into a domestic dispute with his estranged wife, an incident that involved Slocum firing a handgun into the floor of his home, documents show.

He was indicted on four criminal misdemeanors - each of which was later dismissed - and in February 2009 a county law enforcement merit-system panel reinstated Slocum.

Slocum's return to the Sheriff's Department lasted a little more than year.

On March 4 Slocum was escorting the 12-year-old boy to a holding cell at the juvenile court when the boy "flipped off" Slocum and mouthed an expletive, according to AZPOST documents. Slocum went into the cell to confront the boy, then stepped out of the cell, removed his utility belt and then removed the boy's shackles, documents show.

Slocum, who self-reported the incident, told internal-affairs investigators that he thought the inmate was at least 16, and he confronted the boy to show that challenging someone in a position of authority was not appropriate behavior, documents show.

The AZPOST board, if it chooses to act on Slocum's case, would be initiating action only to revoke his peace officer certification. A further hearing would be necessary to formally revoke his credentials.