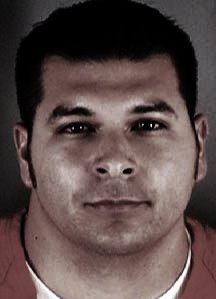 2 charges of inflicting injury
on a child(4 years old)
and 2 charges
of making criminal threats.
He was also charged
with misdemeanor
spousal abuse.
He had been on unpaid admin leave
because of another incident
when his girlfriend said he told her that if he lost his job he would kill her first, then her daughter, and then himself. She said he also vowed to shoot the deputy "traitors" at the Palm Desert sheriff's station and that he had repeatedly threatened to "go out like McGowan" if he lost his job - David McGowan, the ex-cop/ Riverside County district attorney's office investigator who murdered his mother, wife and three children before turning the gun on himself earlier this year. She had bruises which she said were from Santos and last I read - back in June - the girlfriend had been placed into victim/ witness hiding.
Reason given for the charges being dropped is lack of evidence.
on 12/21/2005