...At his first trial in 2002, Camm was convicted in Floyd County of murdering his wife, their 7-year-old son, Bradley, and 5-year-old daughter, Jill, in the garage of their Georgetown home. But the conviction was overturned by the Indiana Court of Appeals in August 2004... 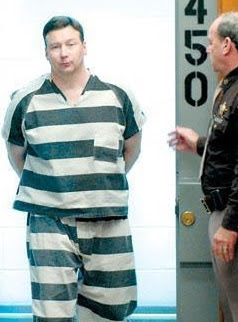 er 2000 murders of his wife and their two small children, sending the case back to Floyd County for a possible third trial. In a 4-1 decision, the court said "speculative" evidence that Camm molested his daughter a day or two before the murders should not have been allowed by the judge because it could inflame the jury. The court also said a friend's statement that Camm's wife, Kimberly, expected to see him at 7 to 7:30 the night of the murders should not have been allowed because it was hearsay that couldn't be challenged because Kimberly Camm is dead... Camm "was stunned, happy and relieved"... At his first trial in 2002, Camm was convicted in Floyd County of murdering his wife, their 7-year-old son, Bradley, and 5-year-old daughter, Jill, in the garage of their Georgetown home. But the conviction was overturned by the Indiana Court of Appeals in August 2004... In Friday's ruling, Chief Justice Randall Shepard dissented from the majority, arguing that "two reversals entered by the appellate courts in this case have unnecessarily sanitized the evidence" against Camm. Shepard said at least some of the evidence about affairs on which Camm's first trial was reversed should have been allowed and that the affairs not long before the murders could be proof of a motive. He also said alleged evidence that Camm's daughter was molested was allowable as "an inference" about a motive. The majority disagreed, however, saying there was no connection of Camm to the molestation. Still, the majority also said there was enough evidence for a reasonable jury to convict Camm... [Full article here]

JURORS IN 2ND CAMM TRIAL REACT TO OVERTURNED VERDICT
WAVE
By Janelle MacDonald
Jun 27, 2009
[Excerpt] ...WAVE 3 spoke by phone to two members of the jury from Camm's trial in Warrick County. One, Dianna Gelarden, said she wasn't surprised by the court's decision. Gelarden said Camm's family said after the trial they'd keep trying until he was set free. Another, James Sturgeon, said he still has a hard time talking about the trial and feels for another jury that would have to hear the case if there is a third trial. Friday, prosecutors said they will ask the Indiana Supreme Court to reconsider its decision before deciding if David Camm will face a third trial... [Full article here]
[police officer involved domestic violence law enforcement fatality fatalities murder familicide indiana state police trooper]
on 6/28/2009