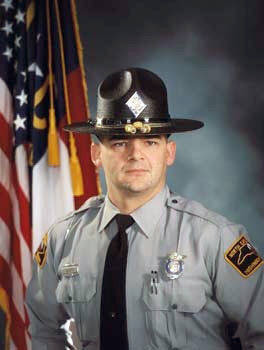 DON'T MAKE ASSUMPTIONS BEFORE THE FACTS COME OUT. THERE IS NO INDICATION IN ANY NEWS THAT TROOPER SCOTT KNEW WHAT WAS HAPPENING. THERE'S AN INVESTIGATION - AND THAT ONLY MEANS THE FACTS ARE BEING EXPLORED, NOT THAT HE IS GUILTY OF STANDING BY DURING A BRUTAL ASSAULT. I DOUBT THAT THERE ARE VERY MANY LAW ENFORCEMENT OFFICERS WHO ARE CAPABLE OF WATCHING AN ATTACK OF THIS NATURE WITHOUT TAKING SOME KIND OF ACTION.

TROOPER IN HOME AS FIGHT WENT ON
Wife reported violent spouse
The News & Observer
By Leah Friedman
Aug. 22, 2009
[Excerpts] PITTSBORO -- The state Highway Patrol says a trooper was at a Pittsboro home Aug. 14 when a prominent Chatham County real estate agent was accused of choking and pointing a gun at his estranged wife. A Highway Patrol spokesman said the trooper was on duty but was not at the house on official business. Highway Patrol officials won't identify the trooper but acknowledge separately that a trooper who patrols in Chatham County was placed on administrative duty a day after the incident. On Aug. 15, Col. Randy Glover, who heads the state Highway Patrol, placed Trooper Anthony E. Scott, 38, on administrative duty and ordered "an internal investigation into the matter on Aug. 14," according to Capt. Everett Clendenin, the patrol spokesman... Generally speaking, Clendenin said, troopers are expected to take action if a crime occurs in their presence. He also said the patrol would investigate if it received information that a trooper was having an extra-marital affair... On Aug. 14, Eric Andrews, 40, of Silk Hope Gum Springs Road in Siler City, arrived at the house in the Chapel Ridge golf course community, where his wife is living, to discuss their separation, according to Chatham sheriff's officials. In a 911 call to emergency officials about 11 a.m., a sobbing Jennifer Andrews reported that her husband "tried to kill me." He made her get on her knees, put a gun to her and "said he was going to shoot me," she told the dispatcher. She said he tried to strangle her and "dragged me through the house by my neck." Eric Andrews then drove his green Jeep Commander to the sheriff's department parking lot with the couple's two children, Jennifer Andrews told the dispatcher. He had told her he was going there to turn himself in, she said. "He has my kids in the backseat, and he has a .357 loaded," Jennifer Andrews says to the dispatcher. "It's loaded. It's definitely loaded." The dispatcher confirms Eric Andrews is in the sheriff's department parking lot. "I want to see my kids," Jennifer Andrews pleads. "Please, just tell me they've got my kids." Jennifer Andrews made no mention of anyone else being in the house during the 10-minute 911 call. Eric Andrews surrendered to deputies without incident in the parking lot. Officers took a Smith and Wesson revolver from him during his arrest... Andrews was charged with felonious assault by strangulation, felonious second-degree kidnapping, assault by pointing a gun, assault on a female and communicating threats. He is still in the Chatham County jail with his bail set at $1 million... [Full article here]
[police officer involved domestic violence law enforcement north carolina]
on 8/25/2009