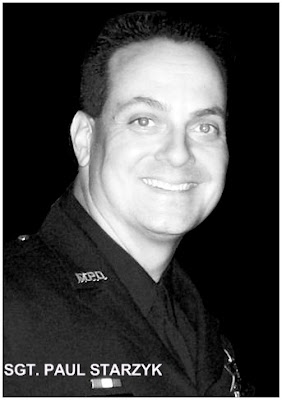 MARTINEZ POLICE SGT. PAUL STARZYK
"We are a department in mourning"

[UPDATE: SGT. STARZYK DONATIONS - Donations can be made by phone at 925-228-7550 ext. 855 or mailed to Contra Costa Federal Credit Union, Starzyk Family Memorial Fund, Account #57950-00, 1111 Pine Street, Martinez, CA 94553. CATALINA TORRES SCHOLARSHIP FUND - A scholarship in honor of Catalina Torres has been established at Diablo Valley College. Donations can be made to Diablo Valley College Foundation, 321 Golf Club Road, Pleasant Hill, CA 94523. The memo line of the check should read "Catalina Torres Scholarship Fund." SGT. STARZYK VIGIL - The Martinez City Council has canceled its Wednesday meeting and instead, at 7 p.m., will lead a candlelight vigil in Starzyk's memory at City Hall, 525 Henrietta Street. CATALINA TORRES FUNERAL - A service will be held for Catalina at St. Catherine of Siena Parish in Martinez, 1125 Ferry St., at 2 p.m. Friday. SGT. PAUL STARZYK FUNERAL - A service will be held at the Sleep Train Pavilion in Concord, 2000 Kirker Pass Road, at 11 a.m. Thursday.] 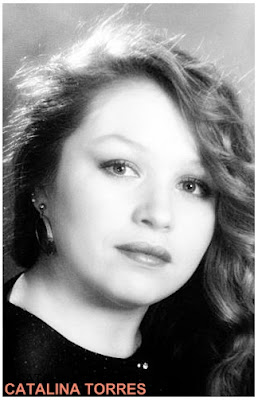 CATALINA TORRES
"She died as she lived - a hero"

Guest books for Paul Starzyk, Catalina Torres, Felix Sandoval
MARTINEZ COP DIED TRYING TO SAVE 6 CAPTIVES
San Francisco Chronical
Demian Bulwa
Monday, September 8, 2008
[Excerpts] Trying to save three women and three screaming children from an angry gunman, Martinez police officers Paul Starzyk and Ian Leong stood in a narrow hallway leading to a second-floor apartment on Saturday - and prepared to go in. But before they could, police officials said, gunman Felix Sandoval poked a hand out from behind the door and opened fire, blindly, with a .38-caliber revolver. Starzyk, a 47-year-old sergeant, was wearing a bulletproof vest but was hit twice in the upper body. Starzyk initially returned fire along with Leong, but he was fatally wounded. Within minutes, officials said, Sandoval was shot dead by a third officer who responded to the apartment and unleashed a German shepherd. Once inside the apartment, authorities found a 44-year-old woman - the cousin of Sandoval's estranged wife - dead in the kitchen... Starzyk was the father of two young boys and a girl.... Friends of Sandoval's other apparent victim - Catalina Torres, a 44-year-old mother of two grown sons - said her death was bitterly ironic because she had worked as a volunteer advocate for battered women at Concord-based Stand! Against Domestic Violence... Police are working closely with Starzyk's family to plan his funeral, which is tentatively scheduled for Thursday. They are also setting up a college fund for Starzyk's children... "The people of California are forever indebted to Paul's tireless service, and we will never forget his selfless dedication to public safety," Gov. Arnold Schwarzenegger said in a statement Sunday. Flags flew at half-staff at the Capitol... [Full article here] 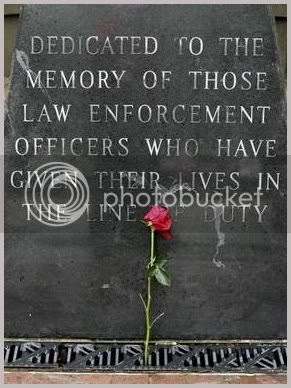 MARTINEZ COP, WOMAN SLAIN - GUNMAN DEAD
San Francisco Chronicle
Henry K. Lee, Rachel Gordon,Demian Bulwa
September 7, 2008
[Excerpts] ...A shaken Martinez police chief announced that Sgt. Paul Starzyk, a 12-year veteran of the force, was shot to death after he responded to a domestic violence call at Elegant Hair Design, a beauty salon on Pacheco Boulevard, near Morello Avenue and across the street from the Shell Martinez Refinery. He leaves behind a wife, who is a deputy sheriff with Contra Costa County, and three young children. Starzyk, a 47-year-old Antioch resident, was airlifted by helicopter to John Muir Medical Center in Walnut Creek but did not survive his life-threatening injuries, said Police Chief Tom Simonetti. "As a department and a community, we are devastated by this tragedy," Simonetti said. "We are a department in mourning."... Stephen Boutte said he was driving by the shop when he witnessed the suspect smash the plate-glass window. Boutte said he got out of his van, confronted the suspect and asked him what was going on. "He kept telling me everything was OK, but people inside the shop were screaming at me to call 911," he said. Boutte said the suspect calmly walked around to the back of the business, and it was there, outside the salon, that gunfire erupted... In a story that ran in the Contra Costa Times last month on new police recruits, Starzyk was quoted talking about the life of a police officer. "I LIKE TO SAY, 'IT'S A FRONT-ROW SEAT AT LIFE,' " HE TOLD THE NEWSPAPER. "YOU HAVE TO HAVE A CALLING TO COMMUNITY SERVICE. ONCE YOU GET THE JOB YOU FEEL YOU KNOW YOU COULDN'T DO ANYTHING ELSE." Martinez Councilman Mark Ross, who knew Starzyk, said the officer died a hero. "He arrived at a very dangerous scene and intervened to try to protect one of our citizens," Ross said. "We lost one of our finest"... Marco Nunez, a friend of Torres, said she recently helped his family cope with his sister's battle against cancer... Nunez said that while he doesn't know exactly how the tragic shooting unfolded, he believes Torres was trying to protect her cousin. He called Jose Felix Sandoval "a coward"... Police from Martinez, Pleasant Hill and Concord were joined by Contra Costa County sheriff's deputies, California Highway Patrol officers and Contra Costa County firefighters on the scene. Also on the scene were representatives of the Contra Costa County district attorney's office... [Full article here]